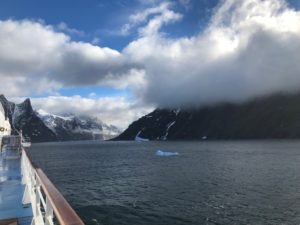 Monday July 2nd, 2018, showed where cruise ships, with their mobility, have an edge over static hotels and resorts, however luxurious and unforgettable those might be.  Everyone onboard Seven Seas Navigator knew we would be spending at least five hours going through Prince Christian Sound, also known as Prins Christian Sund, but none of the first-timers knew what to expect, and even the highly experienced lecturer-guide, botanist Mike Scott from northern Scotland, had to admit he had never seen it looking more beautiful. 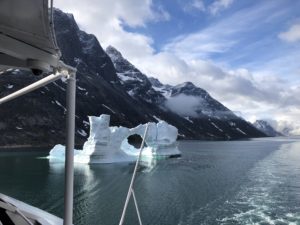 The Sund is the waterway in southern Greenland that separates, more or less from west to east, the Greenland Icecap mainland to the north from Sammisoq and other islands of the Cape Farewell Archipelago to the south.  The entire length of the Sund is 100 kilometres, and its maximum width is 2.7 kilometres – at its narrowest, there is barely room for the ship to go through, especially when there are literally hundreds of icebergs of all shapes and sizes.  For a start, see the photo at the top, taken from the ship’s bridge by the hotel GM, Franck Galzy. 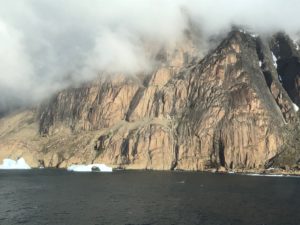 A different cliff-face to port

All day long, amazingly, the sun shone – after what seemed days of fog, nonstop rain, and sometimes rockin’ and rollin’, this was truly a miracle. The sun shone, but it was amazingly cold and passengers bundled up in Moncler jackets through to full padded one-sies.  At times the sides of land were barren rock, but then quickly we passed to snow and sparkling glaciers – the vista either side seemed to change every minute. I had a great time working out in the gym, on the top (twelfth) deck, with some of the best views imaginable – I looked out at my new friends huddled out there in the cold.  From time to time a crew member went around with trays of Bloody Marys. Other spellbound passengers asked for hot coffee. 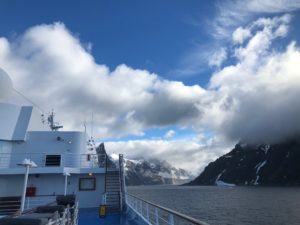 But all the time, such memorable scenery

Some of the mountains we passed soar over 2,200 metres and I am sure that some people on board Navigator, both passengers and crew, took at least 220 photos each.  But the officers on the bridge were working, nonstop. The day following I caught up with one of the two blue-eyed Danish pilots we had taken on days earlier in Corner Brook, Newfoundland (their company is actually based in Nuuk).  For two days, before and after the Sund, they did six hour shifts, on or off, 24 hours a day – his face lit up when he talked about the perfect conditions we had had. Could not have been better. Since he is doing one Sund crossing a week, summer long, either west to east or east to west, that really says something, and it is tempting to say that Regent Seven Seas had even arranged the weather.