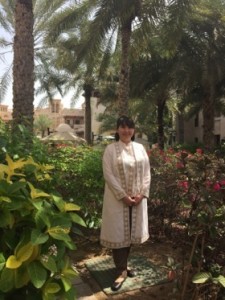 Madinat Jumeirah – the Arabian Resort occupies a total of 78 acres of prime beach land on Jumeirah Beach. Its master plan included 2.5 miles of inland canals, and a gigantic soukh, a conference centre, and a big spa and much else. It also has two main luxury hotels (with a third being built right now) and lots of villas. The gal was invited to Dar Al Masyaf, a complex that consists of 29 duplex villas around open courtyards. One of Villa 27’s lovely butlers was Aida Baibosunova from Kyrgyzstan. Come and see me when I am running my own hotel, she said with a big smile. 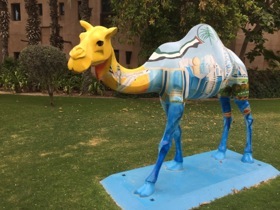 Dar Al Masyaf is ideal for those who want to stay put, to laze on private terraces or out by the private pools that are set between every two or so villas. I found my way back to the main building of Al Qasr, ‘the palace’, by going down the 22 steps from the upper level, where 27-07 suite was, and heading out along a pleasant winding path, until I got to this painted camel, at which point I turned right and up one level to Al Qasr’s main floor. Another way of getting round is to call a buggy, which I hate doing as I like the exercise (and someone I admire tremendously says ‘avoid any resort that requires buggies’). 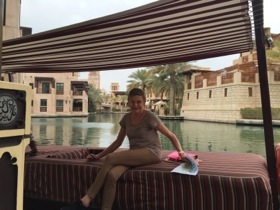 But honestly by far the best way of getting around is to summon an abra, an electric boat based on traditional Arab craft. They glide silently through the water and I could quickly get from the stop for villa 27 to the main stop at Mina a’Salam, at which point it was a mere five minutes hike to the excellent Talise gym, which fortunately opens at 5.30 so there was plenty of time to get there and back before breakfast. This was in-room dining, a feat in this layout, and it arrived absolutely on time, with enough perfectly ripe papaya to cure anyone’s internal ills. 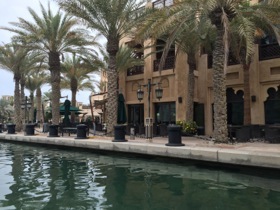 .. and look out from your private villa

There is actually nothing nicer than breakfast on your private terrace overlooking a canal, with no-one else in sight. Fabulous yoghurt, eggs as ordered, lots of fresh coffee – the experience seemed a little incongruous since the interior of villa 27 is based on traditional Arab housing, with unrelieved stone floors and heavy woodwork. But the important thing was that the WiFi was faultless and, oh what bliss, I could find everything, and manage the light switches, without having to call for help. Those designing luxury hotels for the future should realize that luxury travellers will pay a premium for simplicity. And then add in such wows as that camel and the abras.