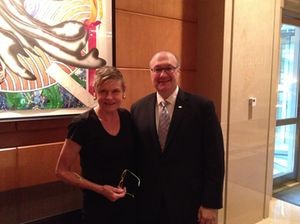 Even the most A-list luxury hotels in Boston are prepared to add yet new elements to keep society ladies, and many others who surely also include the Red Sox camp followers, happy. The gal leapt in the air with joy at the fact that Linda Meredith‘s products are now available in the Mandarin Oriental Boston spa. Clever Linda, eternally youthful and creative, she who expanded from her London salon to Chewton Glen Hampshire and then Mandarin Oriental Barcelona – and now here. Not surprisingly she is doing brilliantly at Mandarin Oriental Boston. Presumably everyone wants to look like long-time Linda Meredith clients Gwyneth Paltrow and Madonna (but she also effects youthfulness with daily workouts in hot-yoga rooms, wherever). 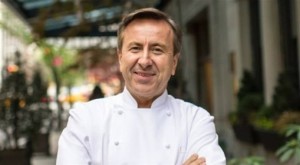 .. as does Daniel Boulud

But the hotel, says GM Alain Negueloua, also had an opportunity to make a big mark with a new restaurant concept. Last October, after three months of feeding guests in the hotel lobby, Bar Boulud, a licence with Daniel Boulud, was unveiled. He knows how to place himself without spreading himself too thin, and after the success of Bar Boulud at Mandarin Oriental London, the company knew how to work with him. He also has restaurants with the Boulud name in New York, at The Surrey; in Montreal (Ritz-Carlton), Toronto (Four Seasons) and Singapore (Marina Bay Sands) and presumably others I do not know about. The ones I do know all work, and brilliantly. 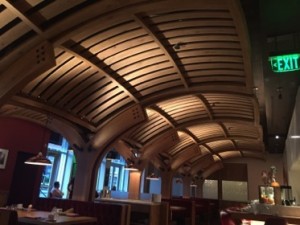 Bar Boulud at Mandarin Oriental Boston is initially awe-inspiring because of the interiors. In the central, arrival, area of the entire space are walls of cases that had held wine, with their former contents, say Château Margaux, clearly marked. The main part of the restaurant now has a canopy, of solid oak, set in such a way as to make you feel you are in a wine barrel set on its side. This is Adam Tihany, by the way – at Sirio Ristorante in New York he was quite restrained, but here he has almost, but not quite, gone over the top. In between the six standing ‘legs’ of this oak construction are banquettes, black leather seating and scarlet velvet backs. 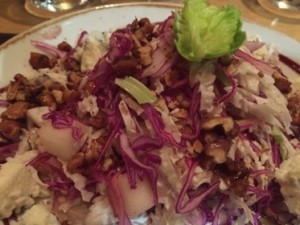 I adore my food, as long as it is GOOD food and simply cooked, and that is what Daniel Boulud is all about – I am always excited at the prospect of eating his food at all the other hotels which are clever enough to work with him. Here I was tempted as always to have one of his burgers but I could not resist his chou chou salad, chopped cabbage and green apple, walnuts and Bayley Hazen blue cheese. Around us, the 100-seat restaurant, and its adjacent bar, were full, and the Boylston Street pavement café would, were it summer, be 100% too. This is just one big success of a hotel (is it anything to do with having a highly-experienced GM who happens to be French, or at least Basque?). At weekends the hotel is a sell-out, too, with shoppers, attracted by all the brands that New York and Chicago have. Well done, Alain Negueloua.