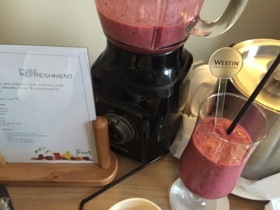 Make your own smoothie

Well this was a first for the gal, and very agreeable it was. Waiting in the room at Westin Dragonara Hotel Malta was the luxury of a do-it-yourself smoothie kit, with detailed instructions. Choose your fruit, from selections of berries, kiwi and melon, all neatly cling-wrapped. Put in orange juice or yoghurt, and ice cubes, and blend (the blender, already plugged in of course, was specially ice-tough). There was a Kim Kardashian-shaped glass, straws and a stirrer. Room 817 also had two balconies, and Dedon furniture, to sit out, sip the healthy smoothie and look out across the Mediterranean. Hotel GM Michael Camilleri Kamsky says the smoothie idea came up at an innovation meeting. I also have a selection of ‘eat well’ snacks, like walnuts for antioxidants, and a ‘sleep well’ menu that encourages me to order a turkey sandwich with guacamole and spinach, and a decaf herbal tea, one to two hours before sleeping. 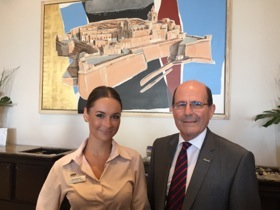 He is pretty creative, this guy, Mr Kamsky. My room has a pedal bin with three marked interior compartments for recycling, which cuts his waste disposal bills to near-nothing. Look how a front desk clerk’s shirt, and lipstick, match the picture, behind, of Malta’s smaller-sibling island, Gozo – and his own tie blends with the painting, too. Michael Kamsky found the painting hidden in a back room somewhere so, for no cost, he re-did the front desk look, putting it on a par with others I have written about recently. He is also, by the way, a most unusual hotelier. After Air Malta, including being country manager of Switzerland and then Australia, he moved on to high speed ferries, and then destination management, bringing tourists into Malta. He moved into this hotel in 2003 and he will reward himself next month by buying a Porsche 911. 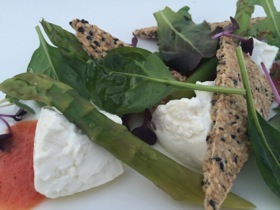 He runs the hotel as a village, in a C-shaped building rising eight floors from ground zero (the lobby is on the third floor). The 340 rooms that are full all summer long, and nearly-so the rest of the time. There is a gym with 600 outside members. Add one spa, one unrelated but neighbouring casino, and four eating places (plus a really friendly executive club run by a cheery Texan lady). We dined outside, on a private terrace of a stone house, a former maid’s sea-set dwelling. More surprises. The four of us, an appropriate number considering the house is now called Quadro, were presented with individual preserving jars (‘jars’, to the Maltese). Open up, to a smoky aroma of deep-fried pigs’ ears on salad. I followed this, somewhat more conventionally, with a disassembled tart – try saying that ten times after a stiff Hendrick’s and cucumber. The components of what could have been an asparagus and fresh local sheep cheese tart made an attractive, and tasty, palette. 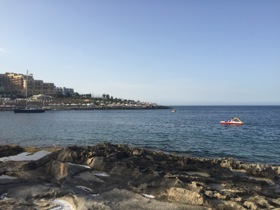 This is the only hotel that is right on the sea, with no road between

As the light dimmed, inner-lit white standing lanterns glowed ice-blue. Back up in 817 I looked down into the open C-shape to see more blue day-glo lanterns down below. Of course, as always, and without a turkey sandwich and decaf tea, I slept like a baby – thanks once again, Barry Sternlicht, for raising the entire level of hotel mattresses with the Westin Heavenly bed. In the morning, I looked out again, to the blue of the Mediterranean – this is the only luxury hotel on Malta, by the way, that is right on the sea, with no road between building and beach. No wonder 30 Norwegians, who met here on holiday one year, now come back, every July, for two or three weeks. It was apparent when I went along to see Miss Texas in the club lounge (‘let me set up a table on the terrace so you can look out to sea’) that several others also taking real English-style bacon and choice of eggs, from linen-knobbed chafing dishes, that these had come back so often she regarded them as friends.