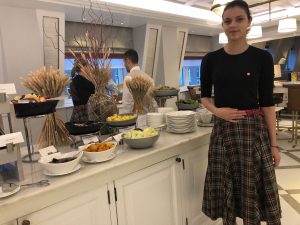 Staff fashion in the Club

The gal had not been to one of Europe’s pre-eminent luxury hotels, The Langham, London, for almost a year – and so much has happened. The entire place was buzzing (it seems a lot of high-spending international travellers have migrated from Knightsbridge as they find it ‘too busy’).  They like this up-to-date historic hotel partly because, although it has 380 rooms, it feels boutique. And it is continually adding new style touchpoints. Servers in restaurants and the outstanding third floor Langham Club, for instance, now wear really desirable gear. Love the plaids, by Jalin, in the Club. 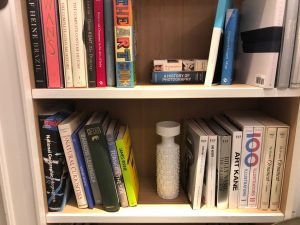 This is a Club that is well worth paying a supplement to access: in London, its only benchmark is Club InterContinental at Hyde Park Corner.  Here at Langham Club, you have a sit-up pantry, with tall communal tables if like so many, you prefer, or you can retreat to the adjacent sitting area that really is akin to an Architectural Digest shoot, complete with designer flowers.  I am always impressed by the hardback books here, offering intelligent art, little-known London and even Who’s Who, the 2015 edition which is becoming more valuable with every year: since then it has only been available online. 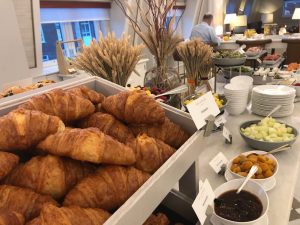 Up 141 carpeted stairs from the lobby, my suite, 550, was similarly desirable, another residential gem, with views straight north up Portland Place. The video shows how the glass-fronted minibar is held in a stylish cabinet. The simple Nespresso machine, already filled with water, comes with a small bottle of long-life milk. The bathroom has an electric towel rail, and excellent lighting.  I ventured out, early morning, to get more exercise down in the below-ground Technogym, and then met up with hotel boss Bob van den Oord for a breakfast. It seemed all breaking-fast venues, the Club, the Palm Court (popular with ladies, especially Asians) and the business-like Landau by Roux, were full. We fortunately had one of the popular Landau alcove banquettes. 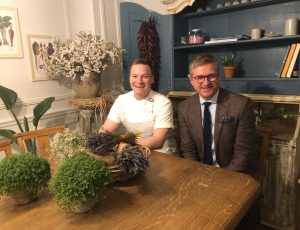 Michel Roux, culinary advisor to this spectacular hotel, is also teaching once a month at its new cook school, Sauce.  Yes, you read this right, COOK SCHOOL.  This is London’s only cooking school in a hotel (where have all the other hoteliers been all these years?).  Here, hotel guests, conference-incentive delegates and locals have the luxury of booking for, say, six-hour demonstrations, with lunch, with Roux, or fixed or bespoke classes with the hotel’s chef, Chris King.  The main marvellously equipped professional cooking room, as shown above, is spectacularly welcoming. There are also two separate rooms, both with long tables surrounded by real and used traditional church chairs – no need to put hymn books in pockets behind the chairs’ backs – and, all around, cookbooks, utensils, and plants.  Yes, you might have guessed, not only did Bob van den Oord have the idea for the cooking school – he designed it, too. NOW SEE LOVELY SUITE 550