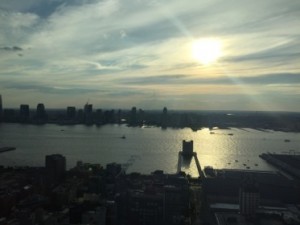 Sunset across the Hudson from suite 4405

When Harry Bueno took the gal up to end suite 4405 of the Trump SoHo New York luxury hotel, he showed off the views. Oh my goodness. Mr T owns not only what seems to be most of the vocal Republicans in the USA at the moment but the airspace around this 46-floor hotel – which is, as a building, owned by a Los Angeles company, CIM, founded by Shaul Kuba, Richard Ressler and Avi Shemesh. And each of the 391 rooms and suites is in turn owned by someone, and Harry Bueno’s day job is looking after all these owners. Back to the views. From the suite’s bedroom you look straight north to Central Park in the far distance. From the salon look west over Hudson River to Chris Christie land, New Jersey. 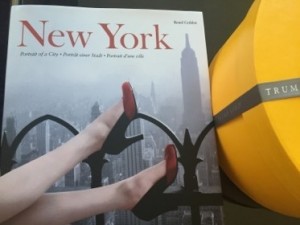 This is the SoHo area of New York, Manhattan with an international edge. I have Taschen books dotted around – the hotel partners with Taschen, who have a mezzanine library here – and I have several weighty tomes from Kyoto‘s Fashion Institute (Kyoto has just been named Travel+Leisure’s best Asian city to visit, thanks to a large extent to the publicity it has had from such events as ILTM Japan). I also have a lot of Acqua di Parma toiletries, stressing yet more internationalism of this place. This is a hotel for the world, as long as it is a fit world. The ever-thoughtful Harry Bueno has put out a do-it-yourself fitness kit, with mat, weights and a stretch rope. Every luxury hotel room should have a fit-kit as a matter of course. 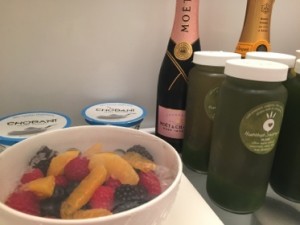 Wellness in the fridge

And someone has also filled the big fridge of the pantry – that is to say all you need for a meal as long as you do not want to heat anything up – at one end of the big salon. There are bowls of berries, and no-fat yoghurts, and eight different type of health drinks, all green (there are also two sorts of bubbles, pink from Moët and brut from Veuve Clicquot). Breakfast in the hotel’s KOI restaurant, by the way, has one of the tastiest, and healthiest, multi-grain toasts I have come across in the USA. KOI is leased out the company that Los Angeles-based Nick Hague founded, and its modern-Japanese, which means sashimi might come swimming in a black truffle-flavoured ponzu pond, is also found at St Regis Saadiyat Island in Abu Dhabi, and at Planet Hollywood in Las Vegas. 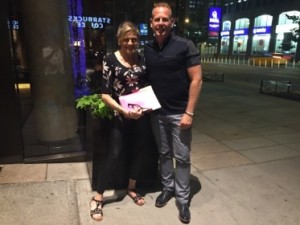 Here, it is a great asset to this luxury hotel. At dinner time it was chock-full of young fashionistas who live and work in this hip part of town. I drank a Californian Pinot, Between The Vines 2014, which went jolly well with Koichi Yokoyama’s miso bronzed black cod on spinach – yes, this is the same Koichi-san who prepared sublime asparagus skewers at Megu, and he promises to do them again next time I am in town. The fashion crowd loves this type of food, but this is a hanging-out space for the young and successful. That is why the hotel GM, Gary Schweikert, and I fitted in so well, and afterwards he, not I, presumably roared off on the Ducati for the beach.