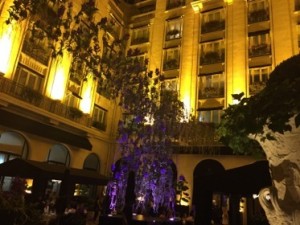 The courtyard at night

Paris is renowned for the courtyards that seemed ubiquitous in all grand buildings of the late 19th and early 20th century eras. Luxury hotels’ courtyards have in some cases been covered over, as at Le Grand InterContinental. Others have been left open, and used to full advantage, summer only of course – think the courtyards of Buddha-Bar Hotel and Plaza-Athenée (Le Royal Monceau Raffles is more full-scale garden than courtyard). Enter the lobby of lovely Four Seasons George V, says the gal, and you look through to an absolutely splendid courtyard, currently artistically decorated with thousands of deep purple hydrangeas and orchids. 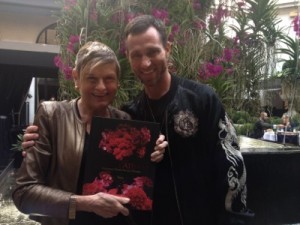 Jeff Leatham, who started as mere florist, is now a creative director par excellence. I so enjoyed meeting him, sharing just a little of his vivacity and enthusiasm. Now his book is out, so large it is a coffee table without legs. It is absolutely gorgeous, page after page of amazing shapes and patterns, a ballet of what can be done with flowers, creating arbours for weddings (Jeff and his team did Chelsea Clinton‘s wedding) and other special events. It is not so much that the book encourages the mere mortal to put a few flowers in a vase but more to inspire the artistry of others. 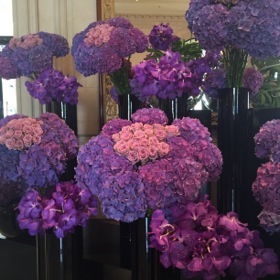 Just one of the many current displays

Around the hotel, there are banks of flowers, in the lobby, at the entrance to Le Cinq (the hotel’s two-star Michelin restaurant). One feature is that Jeff Leatham seems to work mainly in monochrome.

Right now, as if in honour of Thai Princess Sirindhorn‘s 60th birthday, it is mostly deep purple – she was born on a Saturday, and that is that day’s royal colour. There are also some banks of deep red flowers, perhaps to honour the small number of discerning Chinese couples who are dining in Le Cinq. 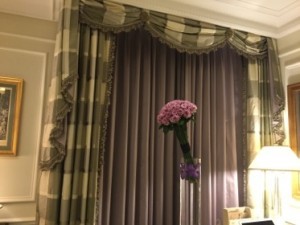 But more than flowers, and exquisite service, a luxury hotel needs perfect rooms, which means that nothing grates. Suite 537 looked over another, rear, courtyard. Easy light switches, mirrors where you want them. Oh yes, and stationery, with little sepia logos of the hotel’s main entrance, stands upright in a classical country-house holder. Softest sage and heather colouring was complemented by a gigantic bunch of flowers artfully placed at a Matterhorn angle, coming out of the top of a yard-tall glass cylinder. Had Jeff Leatham been in there, with housekeeping?