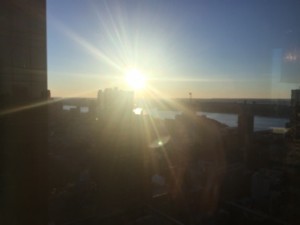 The gal has written before about the joy of looking out over New York‘s Central Park. Without doubt there is only one top luxury hotel at Columbus Circle, at the south-west of the Park, and that is Mandarin Oriental New York. This is the hotel that has bird’s eye views of the New York Marathon, and also, come Thanksgiving, Thursday November 26th, 2015, of the Macy’s Parade. All guests of the 244-room hotel are invited to a 36th floor party, which apparently is lots of fun. This is a rare hotel, too, that has a big-band New Year’s Eve party, which European guests of other hotels also love. Perhaps having a German GM, Susanne Hatje, makes this such a party-place to see out the old year and ring in the new. 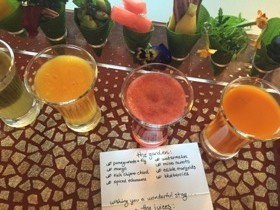 Miniature garden of a welcome

I arrived in plenty of time to watch the sunset from room 5100, a Premier Central Park View suite, some 750 sq ft in all. It also faced south-west so I saw the sun go down over the Hudson. The room, redone by HOK, typifies Manhattan, with soft browns and purples and lots of clear-crystal glitter lights, both floor-standing and ceiling-hung. The effect is edgy, more tango than waltz, and oh so 2015. Look at my miniature garden welcome, with its hand-written label note. I have tiny shot glasses holding, from left, pomegranate and fig, mango, kale chips and chard, spiced edamame, watermelon, microcarrots, edible marigolds, and blueberries. I had four drinks, too, also shot-glass sized, and a welcome note in an envelope stylishly sealed with real scarlet sealing wax. Later a selection of chocolates arrived to undo all that health input. 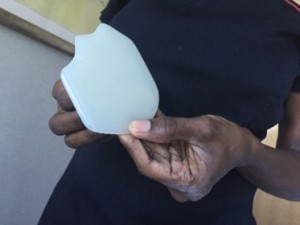 An overall feeling of wellness was enhanced, however, by several things. The Technogym does not open until 6 a.m. but the lady is charge is so welcoming and friendly. Later I had a white jade stone facial. Now see this stone, from the Himalayas. Around its periphery are eight different touch points, not so much for poking but for gently massaging, say for lymph drainage, and for making contact with specific pressure areas. Let me quote Holly Cara Price writing on Huffington Post, April 24th, 2014: ‘The treatments are based on an ancient traditional Chinese medicine technique that utilizes a specially designed jade stone tool to massage and manipulate the muscles and fasciae of the face and neck while stimulating acupuncture energy points of the face, neck and head. It is designed to normalize the flow of qi and blood to the face, neck and head while promoting lymphatic drainage. And you know what? We all need lymphatic drainage. Not only that, but the treatments really do tighten the jawline and neck and reduce the signs of age. I can say even after one treatment I saw immediate improvement. The reported anti-ageing beauty benefits of the treatments include refinement of the brow, cheek and jawline contours, reduction in the appearance of wrinkles, sagging, dark eye circles, puffy eyes, age spots or discolorations, as well as improvement in the overall appearance and vitality of the complexion.’ 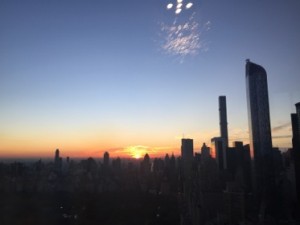 I had merely been told that I would unlock my innate something-or-other but since I cannot remember what that something-or-other was, I will simply say I did indeed feel on top of the world, afterwards, with even more energy than ever. Indeed, that morning I watched the sun rise over Central Park, had a super breakfast in Asiate with Susanne Hatje – who always looks as if she has just climbed Watzmann.the highest mountain in Germany, at 2,713 metres, and still had energy over. There is a chia seed pudding on Asiate’s breakfast menu, but Frau Health had a banana smoothie followed by an egg sandwich – she did leave most of its croissant casing. Having had an outstanding MOburger the previous night (choice of cheese type, choice of fries type, and Dijon, ketchup, mayo and Tabasco came automatically) I kept to this luxury hotel’s yoghurt and eggs and addictive multi-grain toast.  Come to think of it, I simply felt more healthy for being here