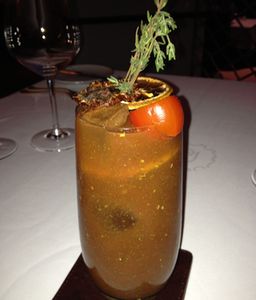 What makes one luxury hotel group stand out from another?  At Kempinski, every lobby has one Lady In Red, a brilliantly simple idea by an American producer, Bruce Tallon.  Dress one of the chic customer agent females in red and she stands out.  At St Regis, one stand-out feature is a hotel’s version of the Bloody Mary.  At St Regis Saadiyat Island Abu Dhabi they offer an Arabian snapper, with za’atar (actually it is so substantial that the gal thought you barely need any food!). 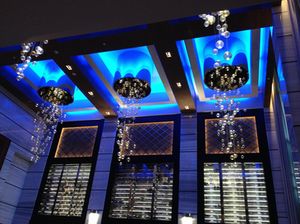 This fabulous hotel, right on the edge of the island and almost, as it were, surrounded by golf course, was conceptualized with such passion by John Pelling, who everyone, colleagues and guests and friends, loved so much.  Having been a food man so much of his professional life, he not surprisingly made the restaurants pretty special.  The grill is called 55/5, because of the address of the original St Regis, in New York.  Look up at its striking ceiling. 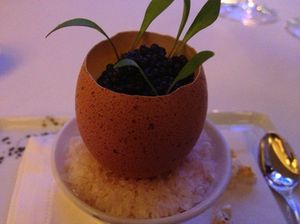 Look down, at the dishes they serve. Before we started the chef sent out an amuse of a boiled egg, but it was an egg with a difference, there was caviar on top.  I looked down at the table linens, which had borders of exquisite pulled thread, the kind of decoration that some people used to do in embroidery classes years ago. The menu cover, by the way, is brown leather, embossed as if it is woven, to match the metal decoration on one wall of the restaurant, woven in wide metal bands. 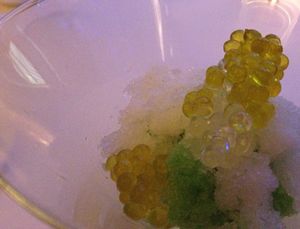 That dinner was one ongoing delight. How about the entr’acte, or palate cleanser, shown?  The martini glass holds a green tomato and lettuce sorbet and, on top, there are tiny beads of olive oil and ouzo.  I wonder how much time has been taken, by aspiring culinarians in the kitchen, to produce such a dish. 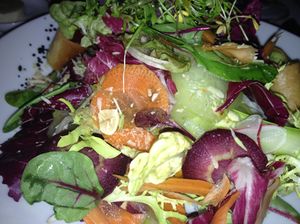 The culinary team has also been travelling, to Al Ain oasis some 45 minutes away. Al Ain’s farms are producing superbly fresh organic produce, and a salad here at 55/5 includes pink bottle radish and garden mache greens from Al Ain, plus pickled cucumber and roast hazelnuts. There are sun-dried tomato bread rolls, and miniature baguettes. 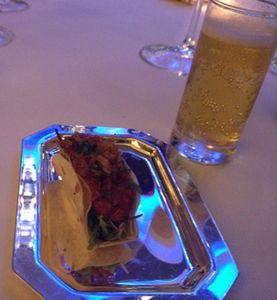 And at some point another chef’s delight came out (I think between the vintage beef and the chocolate soufflé with Madagascar vanilla icecream and crème anglaise but who cares – like a beautiful museum, the order in which you experience something is not always vital).  The point is that when a luxury hotel like this takes food seriously, your whole stay seems better.  When a sense of fun is introduced as well, you remember it all the more. One of the chef’s offerings tonight was a small taco filled with spiced Wagyu beef, from Australia, served with a shot glass of Corona beer.