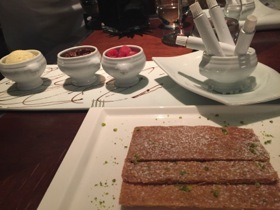 You are brought all the ingredients

Not being a dessert addict, the gal does not ‘do’ sweet things, but sometimes there are experiences that cannot be missed, and the luxury Four Seasons Hotel Shanghai at Pudong came up with something unique. Order mille-feuille and it comes as make-it-yourself. You get a white china tray, a plate with three already-cooked sheets of flat puff pastry, pots of cream, vanilla ice cream, caramelised nuts and fresh raspberries, and tubes of vanilla cream and caramel. 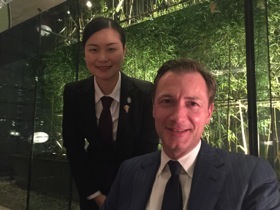 There are many unique features here in Camelia restaurant, a ground floor space that opens off the lobby and leads you, past bar and dining areas, out to a lovely terrace. Take the wines. They are chosen by champion sommelier Ying Guo, who comes from a liquor-selling family but she has made wine her lifetime dedication. She has already been best Chinese sommelier of French wines (2011), Chinese sommeliers’ champion (2012) and sommelier of the year (2013). Now she is going in for the ultra-gruelling Master Sommelier accolade. Tonight, she chooses Shaw + Smith Sauvignon Blanc Adelaide Hills 2014 for a seabass ceviche, and a Trinity Hill 2012 Syrah John Hancock for a roast Australian veal chop.

Thank you to the developers of this 200-room hotel. You take elevators straight up to floors rather than having to make a time-consuming switch at, say, an upper level lobby. I have of course already headed up to the 41st floor wellness complex, with its 75-foot infinity pool with LED screen at one end that shows woods, or a burning log fire. In the Technogym next to it I come across old friends, little Indonesian figures ‘climbing’ the wall, just as they do in the gym at Four Seasons Westlake Village in Johannesburg. It was designer Jeffrey Lee who found the little figures in Bali, and he put them in both places.

Here too are other figures, similarly athletic but playing with hoops, encouraging you, the real human, as you head along to work out. These were specially designed by Lee, and they somehow go so well in a hotel that has so much style. This is the place where a 55 marbled-step spiral staircase wafts up from the lobby, where fashion shows have been, and still are, held. And front desk employees, dressed by Japanese designer Masaru Mineo. look like Chanel models (and yes, that is why the restaurant is called Camelia).

The lobby, light and airy and a tall-floor high, has comfortable nooks and seating areas. An Art Deco clock, in working order bar ten minutes, was found by hotel GM Rainer Stampfer in a flea market in Paris. He cannot remember the origin of this early 20th century statue, a woman in full glory. Anything that smacks of the 1930s, the height of Old Shanghai, fits in so well as this was the era used as theme, throughout, by the main designer, Cédric Jaccard. Even the heavily-lacquered Stefano Ricci boutique in the lobby seems appropriate. Apparently, by the way, the restaurant above the new Stefano Ricci ‘maison’ at Shanghai Exhibition Centre is catered by the hotel.

Yes, this luxury hotel might have design hints of the past but it is very much up to the minute. Right now there is a temporary art exhibit showing pieces by Berlin photo artist Kiki Kausch. Her book, Shanghai Meets Japan, features three quick-taken photos of one person, say Justin Timberlake in the office of the editor of Bild magazine. In one corner of the lobby here are lots of framed photographs of a red handbag in various places. Behind front desk are three life-sized stags, Mister Deer. One has gold horns, one orange and one purple. Original.