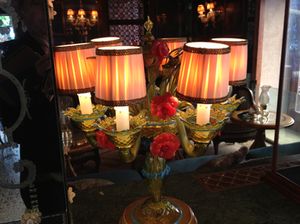 Murano lights (see their base) in the Longhi Bar

As you walk around central Venice you marvel at the palaces that seem to be down every yard-wide side street. The whole city layout is back to front. The typical norm of another historical beauty, say London or Paris, is to have grand facades facing the street (in Australia and the USA, they later adapted this to outback towns, building a two-floor façade with a single-storey shack behind). In Venice, says the gal, palaces faced the canals.  Walking through Campo S. Maria Del Giglio, therefore, who would today think that 60 yards down a side street is the luxury hotel Gritti Palace, that has just undergone a 35-million euro body-toning and maximum-intensity face lift? 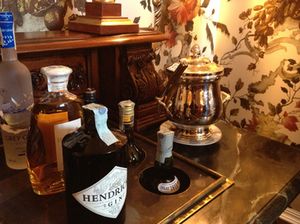 Some things remain as they were.  There are still three original Longhi paintings in the Longhi Bar – but few know which are the real ones, and which are copies.  The Longhi Bar, like everything on the ground floor, now has the most advanced flood prevention scheme, including slot-in waterproof panels for doors and windows.  When the waters rise, as Venice’s invariably do, all will be safe and dry here.  In the bedrooms, fabrics have changed.  They used to be Fortuny, based here in Venice, but those are Egyptian cotton and cannot be fireproofed, so instead designer Chuck Chening has used Rubelli, also based here – it helps, perhaps, that his company, Donghia, is owned by Rubelli. 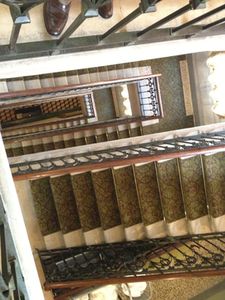 Looking down the original mediaeval staircase

The bedrooms are GORGEOUS.  Most walls are covered in fabrics with outrageous repeating floral designs on white. Fabric panels are held in place by side-by-side round metal studs.  On the panels, even more outrageously, are valuable historical maps and prints.  Add flowers and as many and as elaborate chandeliers and standing lamps as you possibly can (all from another Venetian household name, Murano) and you begin to get the picture of one of Venice’s many treasures. The five-floor building started, in 1475, as a three-floor palace for the Pisani family (well, remember there were no elevators). 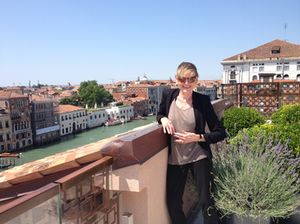 Looking out from the new 2,600 sq ft rooftop terrace

A century later it was bought by Andrea Gritti.  His staircase remains – of course there are now elevators. They are still being creative here.  The Redentore Suite will be booked yearround by the celeb-private jet circuit (Brad Pitt and Angelina Jolie called by shortly after the hotel’s re-opening).  The suite is 910 sq feet, one bedroom, but you can add another.  It has the same Rubelli+studs+maps+flowers as the other rooms.  It also has an 18-tread cast-iron spiral staircase. Push a button and the ceiling panel at the top pulls back to take you up to your own private terrace, all 1,600 sq feet of it.  You have a hot tub big enough for eight, decking big enough for a cocktail for a hundred, and 360-degree views over Venice. 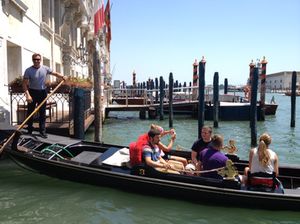 Back down at ground level, I explored another new addition, Blue Mediterranean spa by Acqua di Parma. It reminds me a bit of Raffles Royal Monceau’s in Paris, a white haven, but this has the orange highlights, like flowers and robe details, in the Acqua di Parma orange. There is also a tiny, but oh so stylish, gym (the first time I had seen Technogym ellipticals designed by Antonio Citterio, whose runners have been on the market for some time). Then we sat out on the restaurant’s terrace, cantilevered over Grand Canal. Boats flitted back and forth, sometimes almost forming a traffic jam. 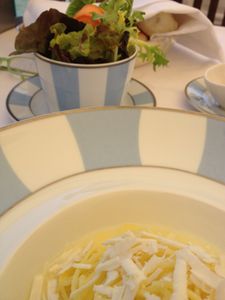 Spinosini with lemon and ricotta

The finishing touch was my introduction to one of the great Italian dishes of all time, Spinosini angel hair pasta with lemon rind and cooked ricotta strips (on Bernardaud, of course).  They have a cooking school (14 maximum) in the kitchen here at this luxury hotel, which you can also hire for a private dinner, with chef.  Wonder if even I could learn to do angel hair pasta like that?