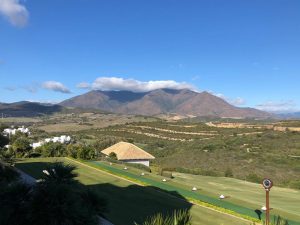 Finca Cortesin Hotel, Spa & Golf, a Preferred property near Casares in south-west Spain, has its own-label beer. For some years the resort, says GM Rene Zimmer, has been serving beer from Catarina Craft Beer, about 10 kms away towards Marbella. In about September 2019, Zimmer talked to the company’s master brewer, Alessio Allegretti, about having an own-label beer to give drinkers a feeling of home-at-the-resort,.

The result is the first 1,000-litre batch of Finca Cortesin Blonde Ale.  Rene Zimmer had intended it for the resort rooms’ minibars, and to put in its private villas, and golf club house (Finca Cortesin has just received yet another golf award, 2020 Golf Digest Editors’ Choice Award for the Best Continental Europe Resort, 2020).  As it happens, it is proving to be an extraordinarily appreciated gift for some of the 120 members of Finca Cortesin’s beach, Par-72 Cabell Robinson golf and other sports private club – 24-bottle cases have been delivered to members who live nearby.

Rene Zimmer left the making of the beer – see below – to the Catarina Craft Beer specialists, led by Daniele Maroni. The result is a natural gluten-free beer with no added preservatives

When it came to the label he and his marketing-guru colleague, Javier Rivadella, were initially at a loss but they settled for a stylish version of the photo of some of the resort’s 220 hectares (see image on left).

How to make the Blonde Ale: ‘We crack the barley, running it through the mill and splitting the husk without breaking it down completely. Next comes mashing, the process during which the milled malted barley is mixed with hot water, to gelatinise starches and extract natural enzymes from the malt, thus converting the starches into fermentable sugar. Two types of malt are used, German and from the Czech Republic. Mash is transferred to the filtering pot to separate the solid part from the liquid, now called wort. Water is added, to reduce the density of the wort, which is clarified by recirculation.

‘The wort is raised to 101 degrees and, to give flavour, hops – German Hallertauer Mittelfrüh and Tettnanger – are added, and boiled for an hour. Stirring causes wort particles and solids to accumulate, for a cleaner wort. After 20 minutes the wort is run through a 5° plate filter chute, to chill the wort to 18°, at which point yeast is added. This begins the week-long fermentation process, whereby the yeast literally consumes the sugars and creates alcohol and CO2. Afterwards, the temperature is gradually lowered to two degrees to allow for the flocculation of the yeast and thus a clearer beer.

‘The maturation depends on the alcohol content of each beer – the higher the alcohol content, the longer the maturation process. Finca Cortesín Blonde Ale, which has 4.9% alcohol, was matured for four weeks. The result is a slightly cloudy beer, with a nice layer of white foam. Hints of hops, herbaceous and earthy stand out on the nose. On the palate Finca Cortesín Blonde Ale is soft with a slight bitterness and hints of honey and, again hints of hops, citrus and flowers’. www.hotelcortesin.com