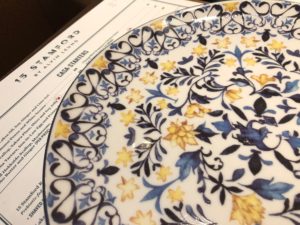 Finally, after a couple of years’ delay caused by change of management company, the gal was able to experience Singapore’s historic-new luxury Capitol Kempinski Hotel (and no, arrival was NOT by the hilarious electric jeepney, above). The interior of the 157-room hotel, at the junction of Hill Street and Stamford Road, is exactly as the late Jaya Ibrahim, who put so much passion into it, had envisaged. There were stylish welcomes. Paper twists of nuts were a reminder of the Kacang Puteh roving seller who often stationed himself outside the Capitol Theatre.  Supplies included rum, and Mancino Rosso and pineapple juice, plus lemon juice, sugar can syrup, mint and ice, and instructions to make-your- cocktail, one or more. 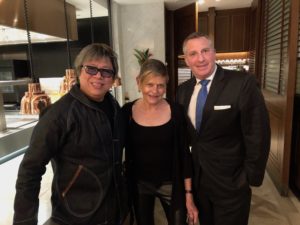 Before Kempinski came into the Capitol equation there was going to be a Peruvian restaurant here, designed by current Asia flavour of the month when it comes to restaurant design, AvroKO. Then Kempinski arrived, and the company persuaded Hong Kong-based entrepreneur Alvin Leung to do the food at what is now 15 Stamford. Now this engineer who also owns and runs restaurants does Chinese with a twist.  There is no way this can be a Chinese restaurant, he says he told Kempinski. No matter. It is you we want, came the reply.  So Alvin Leung started work.  First he had china specially designed by Monica Tsang (look closely and you can see charming little demons in the pattern – Alvin Leung, who is a laugh a minute as he talks and laughs simultaneously, and nonstop, calls himself ‘demon chef’). 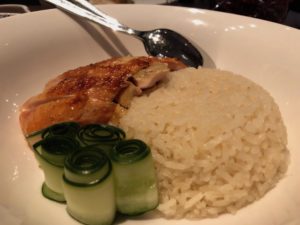 He produced tastings, in a rapid stream. There was his version of that all-time favourite, chicken rice; there was Hamachi with ponzu and white sesame, and US wagyu ribeye, and his favourite best-sellers, Hokkaido scallops with Sakura plum shiso and soy jelly, and Har Mi linguine with tiger prawns, and roast cod fish with Scottish razor clams, lemongrass and foie gras sauce.  I do not want to be better, he said, I want to be different and I don’t believe in trends. I was exhausted, but not he, although he had a wake-up call booked for 1.30 a.m. to head for the airport.  Christian Gurtner, who moved to Kempinski specifically to be GM of this unique hotel, had said earlier he had diverted from medicine as he found studying bodies boring, certainly has no time to fall asleep on the job in this luxury place – and if he does want variety, he can always walk a few metres to the complex’s Capitol Piazza, with dozens of shops and restaurants and the 900-seat Capitol Theatre, designed to copy the Roxy Theater in New York and opened 1930. NOW SEE STUNNING SUITE 316