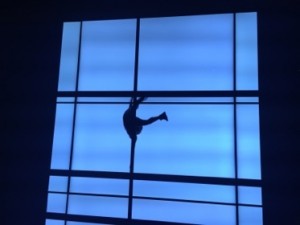 A video in the lobby…

It is always great to see how luxury hotels can take their standards even further up. Hyatt is generally recognised to be among the best in the hotel ‘food’ business and they certainly know when to tweak, or change, what they already have. The luxury Andaz Hotel Amsterdam has been a hit with the luxury lifestyle crowd since it opened three years ago – partly because of the unique design by Marcel Wanders, who also happens to be co-owner of the 122-room hotel. It has a gorgeous, deliberately-wild garden, and many lifesize statues of mediaeval princes dotted around, and ten-foot high red chairs as a reminder that Amsterdam is known to some for its red light district. But today is blue, and the gal is greeted by a moving video in the lobby. 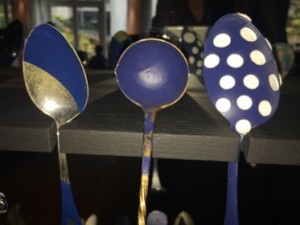 ..unique blue spoons in a vitrine …

The all-day restaurant is Bluespoon, and it has just been tweaked. Marcel Wanders asked his team to design individual blue spoons, and what a change for them (this is the team that sometimes produces, say, lifesize horse sculptures with lamps coming out of their heads, as at the British Airways gold lounge at Heathrow). They have generally reinvented Bluespoon, with softer lighting, some round tables to take away the square look that was there before. Different types of chairs have been introduced. New chef Kasper Stiekema has come in, with a splendid pedigree and an absolutely charming smile. His lunchtime menu just satisfies anyone, Salads, Between bread, Small bites, Soups, Mains and Sweets. 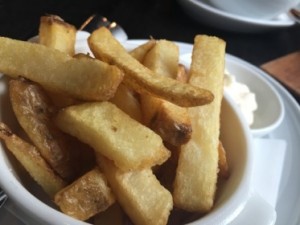 But let me start at the beginning. A slate bears rustic bread and the most gorgeous butter since the definitive seaweed butter from Jean-Yves Bordier. Like his, you can eat this anise-scented butter, from De Lindenhof all-rounder farm, all by itself. I went on to a yellow beet, endive and goat cheese salad, from North Holland, which the menu suggested could be enhanced with grilled corn-fed chicken breast, also from the De Lindenhof farm. Of course I had to have the Dutch national dish, a side of fries – in this case hand-cut chips – comes, as is usual in the Netherlands, with mayonnaise.   There was no room for dessert. 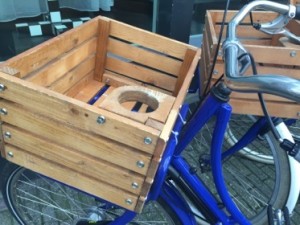 The hotel’s blue bikes have wood baskets, with slots for your drink

And the effect of this tweaking? Covers are up, the locals like it, and those who run this luxury hotel continue to smile, but with even more conviction. And on my way out, I passed the hotel’s bicycles. Blue, of course – but look how the wood baskets have space for a drink (gin and tonic, or Heineken?)