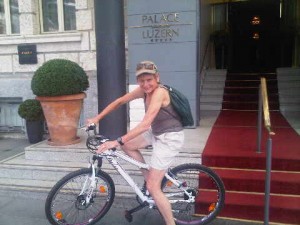 Setting off from Palace Luzern to explore the locale

Head down from Bürgenstock to Lucerne (or Luzern), right on the lake.  It could easily be thought that 90 percent of visitors then immediately rush to buy watches, lots of them for lots of dollars, or rather renminbi.

Chinese pour in, want to find a room for under a hundred dollars and then think nothing of dropping $40,000 or so for the latest Bucherer or De Grisogono, both of which come from Lucerne.

Apparently some of the watch shops have managed to overcome the Everything in Switzerland Closes on a Sunday disease, much to shoppers’ delight.  But the gal has no interest in extending her timepieces.

Arriving at the Palace Luzern – a Leading hotel which dates back to 1906, when it was built for the same Franz-Josef Bucher-Durrer who set up Bürgenstock –  she spied a bike, and she was off. 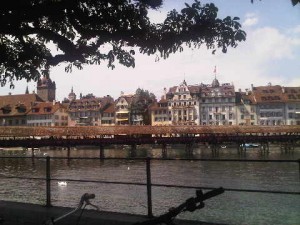 First to the covered bridge, technically the Chapel Bridge (Kapelbrücke), going 558 ft diagonally across the Reuss River. The original dated back to 1333.  How ironic that it burned down in 1993, but it was re-opened nine months later.

Trying to cycle in this area of town, by the way, should be easy.  There are cycle lanes everywhere but others on bikes do not always follow them, the pedestrian crowds (all those watch addicts) do not look left, right or in front of them, and in some cases the bike lanes go right down the centre of the road, with cars either side.  B dangerous. 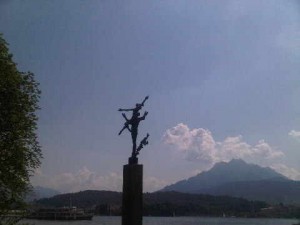 Lucerne has iconic buildings, statues - and mountains around

Yes, there is lots of culture in Lucerne, even though the aforementioned 90 percent remain oblivious to it.  For the sensible ten percent however, the old town is well worth exploring; its marvellous buildings go back centuries.

Lucerne Festival, which takes place every summer (the 2012 theme is ‘Faith’), is in a Jean Nouvel building, though I must admit I have not been a fan of his since being shown round the Vienna hotel he themed for the Austrian capital’s Dom cathedral, with its off-white, grey and near-black roof tiles (as a result, that hotel’s rooms are either all-white, all-grey or all-black, relieved only by white bath towels and sage-green Hermès toiletries). 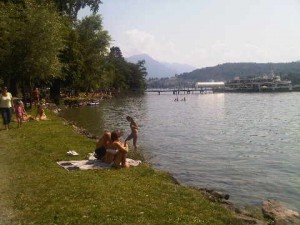 The lake is a magnet in hot summer days

Anyway, I cycled round to the rail station, and admired again how people arriving by train can then follow clear signs for a mere few-minutes’ walk to a lake ferry that will take them on to, say Weggis, which is what I did once, arriving exactly on schedule at Weggis pier.

This is Switzerland.  Today, I cycled clockwise around the lakeside path (another Wanderweg, as in Gstaad, but this time absolutely flat). After passing between the historic Palace Luzern, where I was staying, and a statue garden with exactly-manicured flower displays, it was quickly into the countryside. People were sailing, others were swimming. 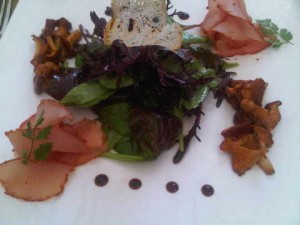 A summer salad with locally-smoked ham...

When the sun shines in Lucerne, it is time for outside.  In the evenings, Palace Luzern, part of the Victoria-Jungfrau Collection, evokes memories of times past with a charming pianist who tinkles the keys on a piano set at the top of the eight stone steps leading from the hotel’s rear, lake-facing, door down to the garden.

Markus Iseli, the boss of this luxury hotel, called over Erika Schumann, the chef who is so lovable you just want every dish of hers to be a total success (she is the youngest of 11, from a mountain farming family, and she started by cooking for them-all, before she was a teenager). 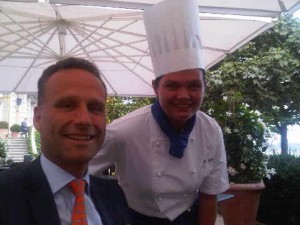 Her food is farm-fresh and seasonal.  She may suggest a salad with chanterelles that her mother picked this very morning, with a couple of curlicues of Palas Loma ham smoked by a farmer friend.

This is real food, not a transport wagon or cold-chill cabinet in sight.  And she is fun – she heads the printed menu for Jasper, as her restaurant is called, with such titles as Fresh & Yummy (starters), Much Sought-After (soups) and so on.  One special is catch of the day.

A whole seabass is brought table-side, and skilfully dissected by another young woman, who had also suggested, selected and poured a rare Nauer Rarum 2007, a limited edition of only 1,980 bottles.  Markus Iseli talks about Lucerne’s famous markets – see Lucerne Market Cookbook by Renate Matthews and Markus Zuber, with recipes ranging from a Sauerkraut tart to Carnival tiramisu with Campari. 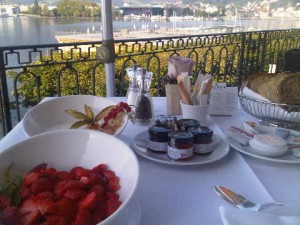 Breakfast on the terrace of room 118 at Palace Luzern

You need to visit Lucerne’s flower and food market, held every Tuesday, Friday and Saturday, says the inspirational Iseli. You must come back in December, when the hotel’s marbled and gilded lobby is turned into a Christmas market, with local artisan vendors selling collectibles, edibles and potables.

Is this, one wonders, allowed to open on a Sunday, when the traditional Swiss decision makers seem to ban the opening of most shops, other than watch conveyor belts?  (Tyler Brûlé ranted in his Financial Times column the other week how he arrived in Zurich on a Sunday and could only buy bread and milk at a petrol station or rail station.) 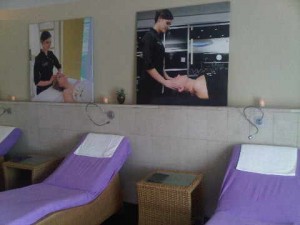 Now, I need to maximise the terrace of gorgeous room 118 – the one opposite the Leonard Bernstein Suite, I suppose he liked the steep hillside view behind but I prefer 118’s lake view. Wake up, turn to my right and use my purple yoga mat while counting the blue lampshades in the room.

The total is 19, thanks to both bedside lights having eight shades.  Finish exercises and breakfast arrives, to be set up on the terrace, with its purple-covered lounger, and dining for four under a pale taupe umbrella.

I look over the historic 1900-vintage swimming pool, in a wood pontoon complete with changing rooms. There are ferries already buzzing across the lake, and a couple of rowing crews.

The local jams go with the marvellous real breads that only seem to be emulated by Austrians and Germans, and this clean air. Feel better for Lucerne would be a great tag-line for this sleepy city that does not seem to realise its natural USPs.

Forget watches, go for health, and if, like me, you can find time for the hotel’s spa, so much the better.  It is run by Fernado Molleda Hernandez, a Costa Rican who used to work at Four Seasons Papagayo.  Here, he rules over a third-floor haven of smoked oak and Brazilian granite, with some Jura chalk.

He has just switched to Niance, a product devised by a young wellness enthusiast, Dr RW Schmidt of Swiss Mountain Cosmetics.  It feels great at the time, and marvellous afterwards, I need to find out more….