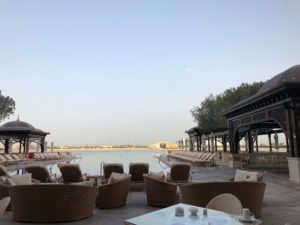 Looking at the pool, the Canal beyond

To keep fit in Abu Dhabi, The Shangri-La Hotel, Qaryat Al Beri, could be just the luxury hotel you need – the name means the ‘village by the guard tower crossing’ – and it is on the Grand Canal between Al Maqtaa Bridge and Musrafah Bridge. The gal certainly felt completely invigorated and refreshed for her too-short stay in this 213-room hotel.  There is so much on offer here, from pool and long sandy beach to ten spin bikes, above, ready and waiting: these are on the rooftop of the three-floor wellness block, which has separate men’s and women’s gyms (you guys will never experience the transformation of shapeless robed figures coming in completely shrouded in black, only to cast it aside to reveal latest workout gear on slim, if too shapely for most catwalks, frames). 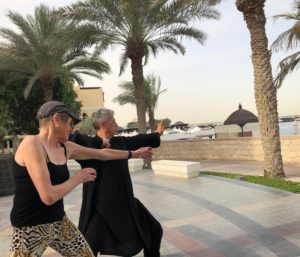 The 11-room spa is in that block too and I had one of the most memorable facials ever, a success not only because, inevitably, I fell asleep, but the Lotus Pink Caviar sheets with which Melody from north-east India worked seemed to transform with a magnificent sheen, and she finished up with extending the facial remit to include really strong leg stretching – hers, not mine. There was more stretching next morning, when the Bulgarian tai-chi teacher took me in hand, so to speak, and showed that just pushing down hard with two clenched fists can have a workout effect. 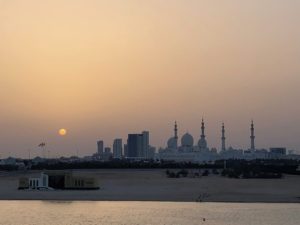 Fortunately I was able to escape between all this hearty exercise to enjoy #627, the Ruby Suite looking right across the Canal to the Grand Mosque, which, like the Taj Mahal, changes colour from first hint of daybreak through to end of dusk. This is a bedroom that really ‘works’.  All light switches are simple flick-switches, and marked in big letters.  Toiletries are easy-see, easy-open Acqua di Parma, there was enough fruit for any fruitarian – there was even more, I discovered, up in the seventh floor Horizon Club, one of the best in the business, with a cocktail hour that stresses its edibles are, where relevant, garden-fresh. They also have copies of the Financial Times, and the excellent local The National, here, not necessarily the norm in this Emirate’s top lodging places. 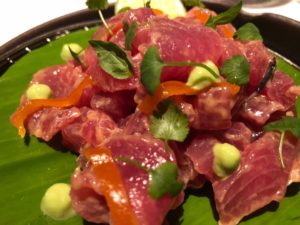 Of course, being this brand there is a Shang Palace Chinese restaurant but since the luxury hotel’s GM Ulf Bremer had temporarily defected, purely for business reasons, to Saudi Arabia I had a good glass of Bekaa red with his Lebanese colleague, Ahmed Issa, who runs the adjacent Traders. This is a F&B man through and through and as we ate in Bord Eau he explained how this luxury hotel’s gourmet-French was, like E. Macron in diplomacy, bringing what it stands for up to date. It is now simple, unfussy food, of the calibre of fresh Gulf tuna with kumquat, and zucchini purée, on a RAK plate from another Emirate, Ras al Khaimah. Our Ksara Reserve du Couvent 2014, by the way, came in Riedel glasses, and when it was finally time to leave I had a farewell card written, and signed, by staff members from ten nations, including Bangladesh, India, Indonesia, Mongolia, Philippines and Russia.  See why this is such a addictive and agreeable place to get, and keep, fit? AND NOW SEE FIRST SUITE 627 AND THEN THE HORIZON CLUB AT COCKTAIL HOUR