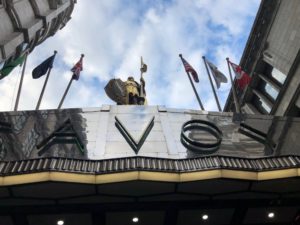 Peter, Earl of Savoy, atop the canopy

In 1929 the owners of one of the world’s best-known luxury hotels, The Savoy – the London one, natch – commissioned a splendid metal entrance canopy, designed by Sir Howard Robertson (perhaps they all wanted to forget that only six years earlier Marguerite Alibert, one-time lover of the Prince of Wales, shot dead her second husband, Egyptian magnate Ali Kamel Fahmey, here in the hotel). The Savoy has so much history, says the gal.  It is named for Peter, the Earl of Savoy, whose lifesize likeness stands above the hotel’s canopy. 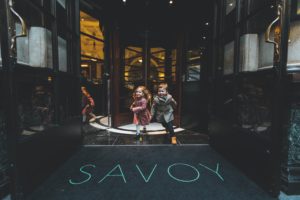 In years past the hotel has been a generational and anniversary magnet. Grandparents brought their children and their children’s children, who grew up with such fond memories of the hotel. This was where adults came, and still come, for special occasions, now more and more including afternoon tea. One difference, says the hotel’s GM Philip Barnes, is that the 263-room beauty today welcomes an increasing number of kids at all times (what a great place for hide-and-seek, in the miles of corridors throughout the eight-floor building, and adults wish that they, like the young, could whirl round and round the Savoy Court entrance’s revolving doors). 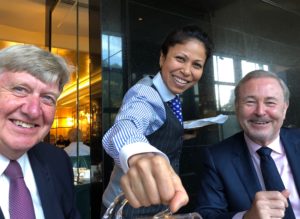 There are certainly lots of traditions here. Try some of the world’s best roast beef, off the 1828 silver trolley in The Savoy-run standalone Simpson’s on The Strand restaurant.  Within the main hotel, any meal for 13 will find an extra seat, holding a black china cat sculpture, Kaspar to ward off the unlucky-13 fear – this was a Basil Ionides initiative in 1898 after South African diamond king Woolf Joel dined with 12 others, and fell upon hard times. A more recent tradition is eating at Kaspar’s Seafood Bar & Grill, overlooking The Thames. I was lucky enough not only to be there with Phil Barnes and his good friend and advisor Michael Gray, equally legendary as long-time GM of two other significant London hotels, but we were served by one of the cheeriest of The Savoy’s super 500-strong team, Rosaline Gomes. 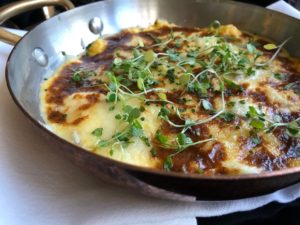 Last month James Corden, star of CBS’ The Late Late Show, ‘worked’ at The Savoy, doing doorman and other duties – the YouTube coverage alone got 815,555 views in a few hours.  I wonder whether he too had time to try Kaspar’s Omelette Arnold Bennett, created here in the hotel in the 1920s for a guest, celebrated novelist Arnold Bennett, 1867-1931.  It comprises eggs of course, plus smoked haddock, cream and Parmesan.  And I am sure both Cordon and Bennett had bedrooms with some of the best views in the house, over the river (see my view, above). The Savoy never stands still. Among things that just might be due for tweaking in the near future is the lobby and current check-in room. TO SEE WHAT THE LOBBY LOOKS LIKE TODAY, VIEW THE VIDEO, BELOW.