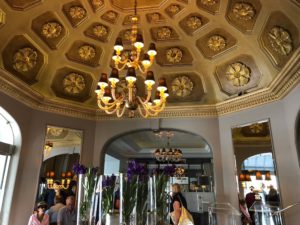 Last time the gal experienced Hotel d’Angleterre, back in 2004 (room 203), it was tired and rather unimpressive.  It had been lording it over Copenhagen since 1755, though the current five-floor building only goes back to the 1870s (architect Jese Vilhelm Dahlerup).  But it almost seemed as if the owners, the Remmen family, were relying on past reputation. Now all has changed, and current chairman Else Marie Remmen, working with her floral designer Alan Evensen – see photo, above – has transformed what could have become a relic. The lobby is beautifully refreshed, and Alan’s flowers are strategic. 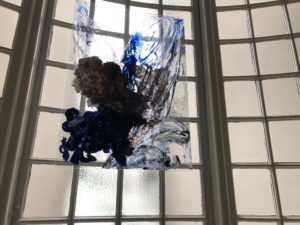 Art on the main stairs..

It is he who has supervised much of the art throughout the hotel. There are now, by the way, only 88 rooms and suites, down from 123 before – at the same time the starting room rate has more than tripled.  I do like the Amazing Space by Laura Bonné toiletries, a good link with the wellness area, which has a 24/7 Technogym and a 40 ft indoor pool. This is all down on a lower level, leading to a two-floor bar, Balthazar, which really comes to life at weekends.  Down here, too, is a hospitality suite, much used by the American guests who constitute 37.5% of all business: many fly in early, or disembark from cruises after an early breakfast, and Spanish Hotel Manager Ignacio Gutierrez says that once the suite was opened all guest grumbles seemed to disappear. 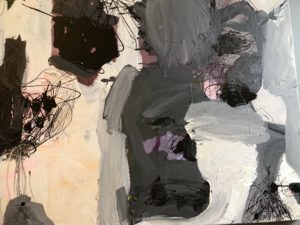 Americans and so many others  like this hotel because it is two minutes’ walk from a metro, and it is handy for many of Copenhagen’s top shopping streets.  Some rave about Torvehallerne food market on Frederiksborggade, about xxxabove?  Magasin department store on Kongens Nytorv, and, for designer jewellery, a discerning Danish friend of mine would suggest Ole Lynggard, at Ny Østergade 4.  You can also shop right here in the hotel, buying well-considered souvenirs as well as small clutch bags perfect for dinners onboard your cruise (another friend of mine boarded only yesterday, Seabourn sailing from Copenhagen to Stockholm, via St Petersburg and Tallinn). 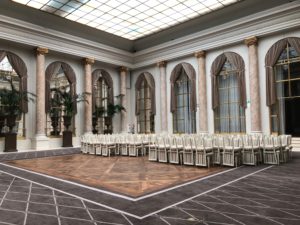 There is always a need for a classic hotel in a world level-one city, and Hotel D’Angleterre is just that. It also fulfils the ongoing demand from some travellers for gourmet fare.  Michelin-starred Marchal restaurant, under chef Andreas Bagh, is named for Jean Marchal, who first opened a hotel on this site in 1755.  At breakfast it is buffet. Lunch offers such snacks as Gillardeau oysters with wasabi, and a caviar selection that includes a Kaviari Kristal D’Angleterre selection, but you can also have a two- or three-course chef’s menu. At dinner, you might concentrate more on the wine, where Cloudy Bay Sauvignon Blanc 2017s shares billing with non-vintage Krug.  Yes, this is just the kind of luxury hotel to suit many experienced travellers.