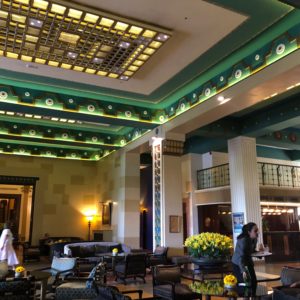 The King David, part of Dan Hotels, is signature hotel not only of Jerusalem but of Israel. In 1931, when it was built, on King David Street, it stood alone on the top of a hillock about half a mile, as the crow flies, from the walled Old City.  The gal was making her first visit, but she felt immediately at home in this area of soft sandstone and Mediterranean greenery – see the image, above, taken from the hotel’s main door, looking back across the street. Sensibly, as it turned out, the six-floor building, with a total of 237 rooms, was built to withstand earthquakes. On July 22nd, 1946, Irgun blew up one wing of the hotel, killing 92 people.  The GM at the time was the legendary André Hamburger. 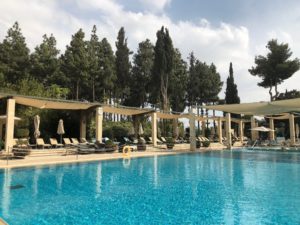 One end of the enormous pool

After a gruelling almost five-hour overnight flight into Tel Aviv, followed by the hour-long 458-bus ride up to Jerusalem, I needed exercise.  Yes, the beautiful pool awaited, but I preferred the gym, where the Technogym screens are set to what is arguably one of the industry’s best ‘hotel information channels’.  This one speaks in historic polysyllables and is really informative, especially since they have got André Hamburger’s son Jacques, himself an illustrious hotelier, to tell how he was brought up in the hotel (he later told me his father had fortunately been outside the building at the time of the bombing). 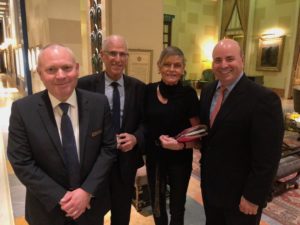 The lobby of the hotel is a museum, a record of all the famous who have stayed here, right up to Angela Merkel, a couple of weeks ago. Some signatures have been enlarged into a floor carpet and there must be just a few guests who step extra hard on ‘Donald Trump’.  Haim Shkedi, who has been GM here since 1994, has met every world leader of any note – his deputy, Eran Hendler, has only been here a year.  I was dining with Dan Hotels’ President and CEO, Ronen Nissenbaum, who started January 1st, 2018. We were in La Regence, which is renowned as best meat-restaurant kosher fine dining in the country – and it was full. I thought David Biton was a genius in creating food that allowed no dairy: amuses were cigar-shaped wraps of mint-flavoured aioli, followed by seared veal sweetbreads, and fillet of beef which, so suitably, came with Jerusalem artichokes. 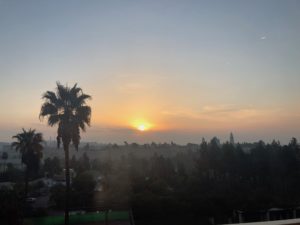 Typically, breakfast places are dairy, which means no bacon or sausage, but this region’s breakfasts anyway are delicious – and heavy on lebaneh and cheeses, salads and breads. I was in 336, a charmingly timeless suite overlooking the luxury hotel’s gorgeous pool and well-tended gardens (is it true that Adam Tihany is going to re-design bedrooms here?). In the morning, the sun rose as I was doing wake-up breathing exercises on my terrace and shortly after, today’s New York Times in hand, heading down to the breakfast room.  The copious buffet was complemented by a main course menu that included a truffle omelette, but time was short and I simply indulged in a whole, perfectly-ripe mango carved to order at the fruit station. Then I met Eran Hendler to get a 360-degree view from the hotel’s flat rooftop (and yes, they do sometimes allow private functions up here), and I was on my way. SEE SUITE 336, AND THE VIEW FROM THE HOTEL ROOFTOP