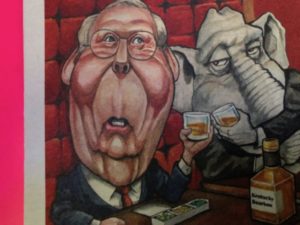 Outside The Hay-Adams Hotel in Washington DC there are, as shown above, Shinola bikes: this is the Detroit-based leather company owned by venture capitalist Tom Kartsotis who bundled Shinola with Wisconsin’s Waterford Precision Cycles to form Shinola bicycles, Made in America.  The gal arrived on foot, walking past the opening to The Record, the luxury hotel’s lowest level bar.  Even though the street entrance has now been sealed off for security reasons and you must enter via the hotel itself, The Record remains a magnet for early-evening drinking, both for hotel guests and outsiders. They are undoubtedly attracted not only by the ambience and service but by the unique and highly collectible coasters that feature hilarious cartoons of political characters. 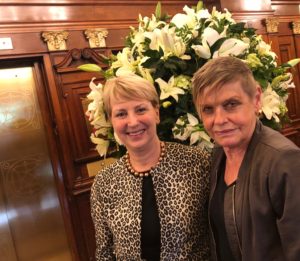 I was lunching with Colette Marquez, the Dutch-born Hotel Manager, upstairs in the main restaurant, an elegant room designed, like the whole of the 145-room hotel, by Thomas Pheasant – a specialist in ‘residential’ designs.  This is, apparently, Pheasant’s only hotel project, although it has just been announced that he is re-doing the lobby of Rosewood Washington, in Georgetown (during its six-month closure, from October 17th, 2018, the hotel will add six standalone adjacent townhouses, each one bedroom).  Here at the Hay-Adams, the owner, Bernard Saul, might well have chosen Thomas Pheasant because he did Blair House, official guest-house for The White House. 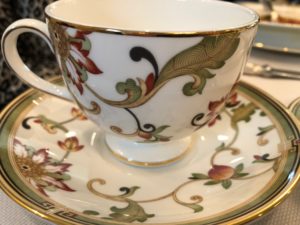 My burrata was an exquisite art work, with lots of taste, and I loved the raw asparagus with it.  This is a kitchen that has, long before it became commonplace, worked for years with local farmers to get the freshest produce.  Elegance and luxury at this independent hotel include the best possible in food, and the serving containers. Interestingly, in the current world of white china, Colette Marquez told me some regulars longed for the patterned china of previous years.  Now, therefore, they have new patterned Wedgwood, as shown.  It is gorgeous, even though it is not ‘Made in America’.