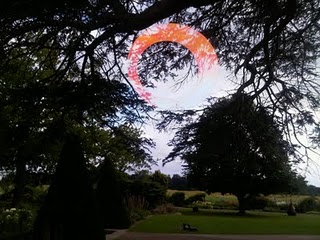 Any gal would love this metre-wide sculpture hanging from one of the 45,000 trees at The Grove, just west of London. We were there last night, specifically to see the temporary outside sculpture exhibition – 79 large works dotted over some of the 125-hectare estate of The Grove.

This sculpture (left) is actually a dichroic acrylic Eclipse by Chris Woods (she obviously has a vivid imagination).

Another woman, Virginia Grub of www.artcontact.co.uk, has curated the exhibition, which sadly closes 31 August 2011 – and one of the other female sculptors, Nicola Toms, is showing a pair of lifesize dachshunds, bronzes of Floosy and Frank (below). 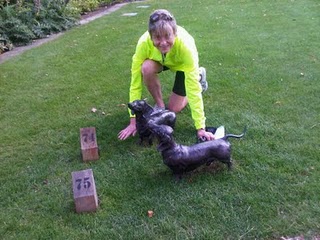 Another piece I loved is the giant granite and aluminium rocks, separated by a vertical reflecting stainless sheet, that is Simon Hitchens’ The Other-I (below). 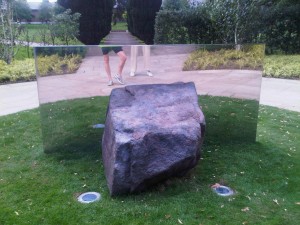 Great hotel this, The Grove. It has 227 rooms, in the original 18th century manor house built for the Earl of Clarendon and in 21st century matching extension built for the current owners, who do not want to be named. The new GM, Jonathan Critchard, is definitely a name to watch. He is all about details, and people. Look after your people and they will look after your customers, he says. He is actually running a mighty operation. The Sequoia spa has 500 outside members, who come from a radius of some ten miles, and golfers flock play the 18-hole pay-and-play Kyle Phillips course.

We found even our arrival at The Grove made us feel like dancing above the ground, golf course or otherwise. Five minutes after turning east from exit 19 of the M25 London orbital (20 minutes’ north-west of Heathrow), the mile-long rolling drive takes you over the Grand Union Canal and gently upwards between golf holes three and eight, on your left, and four and six, on your right. There, above hole eight, stands the lifesize Hunter, another sculpture, a galvanised steel wire piece by Rupert Till. There was something to engage the senses everywhere. Go into the hotel and, behind reception, the wall bears three boards with, I am told, 360 old-fashioned door keys.

I loved corner room 16, in the main house (it came with electrically-heated towel rails and Roederer in the minibar, and there were 1.5 bathrooms with The White Company toiletries). WiFi was free (this ultra-generous hotel has ample supplies of complimentary Hildon mineral water, and there is no charge for bicycle use). Ah, the bikes. The two we tried were good, well-maintained and ideal for following both the two- and three-mile circuits along the Grand Union Canal tow paths, watching holiday-makers maneuvering their long barges along the twisting waterway and through self-operated locks.

I also, being a hungry girl, worked up yet more of an appetite by a good workout on some of the Technogym pieces (and the Power Plate) in the gym, and doing laps in the serious-swimmers’ 22-metre indoor pool (for kids, there are two indoor, and beach-side outdoor pools, as part of Anouska’s club in the two-hectare Walled Garden).

We could have fine-dined at Colette, or buffeted in the Glasshouse, but we opted for the barn-like The Stables. Wood stall-dividers separate the room, which is set with solid oak furniture, and red and white teatowel-like napkins. Come here for some of the world’s best H. Forman smoked salmon, as well as fish’n chips or rib-eye and thick chunky chips that come in their own separate bowl.

I liked the way the wine list offers whole bottles, or 175ml glasses or 500ml carafes – and I loved the Carey Mulligan-look alike Kate and her fellow servers’ gear, namely tight blue jeans and embroidered blue cowgirl shirts – the teams elsewhere are mostly in heather and soft grey shades. And for a supreme breakfast, nothing beats the Glasshouse’s buffet, where many stations offer fresh juice through to whole hams on the bone (and did you know there were so many kinds of berry?).

This is a www.kiwicollection.com hotel, by the way, well worth checking out for meetings, family parties or romantic stays, or even for a girl alone who wants to spa, workout, laze, ready in the library, take a bike out and so on. Yes, this was a sensual stay, from beginning to the very end, when we nosed our car out of an area divided by meticulously-manicured topiary hedges, a very permanent sculpted highlight at The Grove, www.thegrove.co.uk.