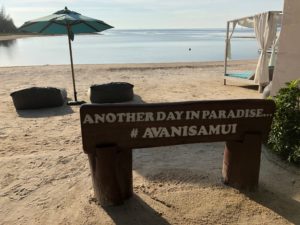 You know where you are!

It is always fun to try a new brand and this was the gal’s introduction to AVANI+ (‘AVANI Plus’), which evolved out of Minor’s existing AVANI brand. The idea is that every AVANI+ offers something special.  Here, at AVANI+ Samui, on Samui island, it is the location, a purely natural part of an island that, elsewhere, is sometimes too full of tourists, other tourists.  Some think that Samui is being throttled as air fares from Bangkok are high (it is less expensive round-trip Bangkok to Siem Reap, for Angkor Wat, than round-trip Bangkok to Samui, whose open-sided airport, like Bangkok Airways which has the monopoly on this route, is owned by the Prasarttong-Osoth family). Others are happy that Samui is not being opened up to the masses that form today’s scourge of over-tourism.  Right now AVANI+ is bliss for its peace and quiet. Its six beach-set villas are especially nice. 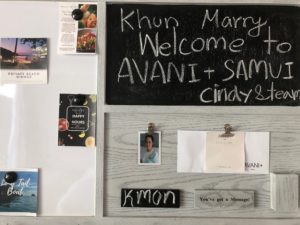 One of my room’s walls

Look at the welcome on the wall of villa 506 – it even has a note from Manager Cindy Delhomel, who was actually on vacation during my visit. Like all 58 rooms, the colours are off-white and blue – it has been re-done by owner Minor’s inhouse team.  506 has the big advantage not only of opening directly on to the beach but it has a six-metre pool, perfect temperature, and a surrounding fence high enough for skinny dipping – and, like all the pool villas, it comes with a complimentary half-day in a Thai long-boat, ruea hang yao, plenty of time to reach Koh Madsum private island for a picnic lunch packed by AVANI+ Samui’sHanseatic chef Kian Wagner.506 is also directly next to the hotel’s outdoor bar-restaurant.  This is open day and evening long. I sat under its big canopy, looking left at the old VW camper-van, now static, that opens up to be the bar. I looked ahead and right to the sea, then at the menu, a big A3-sized board, printed landscape-style, wide rather than tall, and was tempted by its Gin&Tonic section, offering drinks made with Bombay Sapphire, Broker’s, Caorunn, Hendrick’s and Tanqueray: in fact I had a glass of NV Silent Sauvignon Blanc from Marlborough and it went beautifully with an absolutely delicious bowl of salt-and-pepper squid, with lime and aioli. 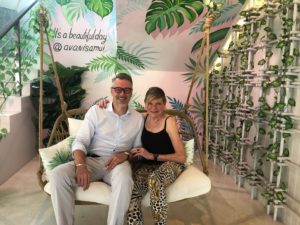 As luck would have it I was there on a Sunday, the one evening when a saxophonist plays.  This encouraged two young ladies, I suspect on a staycation from Bangkok, to pose for selfies and dance for what seemed hours on end (thank you, whoever you were, for that great entertainment).  From my admittedly limjted experience of AVANI+, I would say this IS a brand which encourages you to be yourself.  In my case I swam, I used the bijou but good 24/7 gym, and I borrowed a bicycle to explore several miles around, going past little villages and empty areas dwarfed by sky-high palm trees.  I also had a great hour with Minor’s area GM, Lutz Mueller, who is based 45 minutes’ away at Anantara Samui.  When he first saw this AVANI+, he now admits, he knew it needed tender loving care. 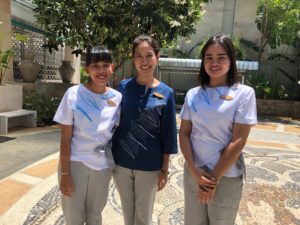 It was an anonymous detox hotel then, and it has since been through a holding stage, white-labelled by Minor while it evolved into AVANI+.  It is not for everybody, he agrees.  It IS for those who want to experience true Thailand, to be away from the crowd. This is the casual luxury that more and more travellers look for today.   And it has the service.   Honestly, the 62 employees were without exception willing to do anything, any time, but, unlike some other places, they never intruded (forget the word ‘butler’, thank goodness that is not applicable here).  I will always remember my farewell from this new-look casual luxury hotel.  Three young ladies whom I had never seen before appeared as my car drove away. Look at their smiles. AND LOOK AT MY ROOM…