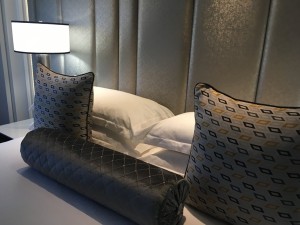 People keep young in different ways. Joan Collins, bless her, hides under wigs, bigger and bigger, and outsize hats and lots of makeup. Jane Fonda looks as if she is still working out 24/7. The Queen rides, probably walks her corgis, uses masses of mental energy keeping more than up to date with what is going on with the world and her subjects. Hotels are no different, says the gal. When it opened in 1984, Sandton Sun was THE hotel in Johannesburg but it had since been overtaken. In September 2015 it reopened after a nine-month facelift costing 210 million rand, and wow, what a fabulous luxury hotel it now is, once again. 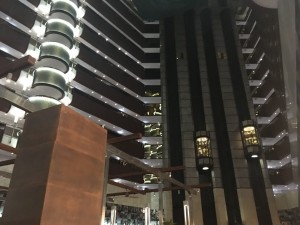 From the sixth floor, the atrium soars to the 20th floor

This is edgy Manhattan, shining brightly in silver and greys, and black and white, and lots of mirrors, with hints of Art Deco put in by local designers Blacksmith. I was in 1720, formed of two previous rooms (there are now 326 rooms in all, on floors six through 20). Look at the bathroom, at the top. I just love having a really attractive painting in the bathroom. I love the colours of the bed. See the video, below, for a complete tour of the room, which has a make-up table but no desk, merely a bar counter, separating living room from kitchen. As at so many homes, this counter, with international sockets handy, becomes desk – there are three high chairs, which swivel – and, when needed, table for inroom dining meals. 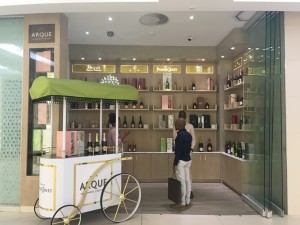 Outside my room, corridors around the tugboat-shaped open atrium have stunning wave-pattern carpets, greys and black. Down at level six, I look up the atrium. Roof level, there is currently a bulbous green tarpaulin. No, this is not another art work but protection for workers who are putting the finishing touches to the entire makeover: soon, a massive two-ton chandelier will hang down, from the 20th floor through several floors below. Sit in the sixth floor atrium’s San restaurant, inside, and you will look up it. I went to see chef Garth Shnier, who had springbok carpaccio all ready for me, and he took me out to The Deck, a 350-person terrace with working firepits and live music, tonight a sensational saxophonist. This is activity place, especially weekend evenings. 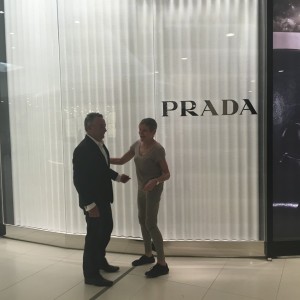 The sixth floor is also entrance to Diamond Walk, with beautifully lit Jimmy Choo, Perrier- Jouët and other magnetic names. Outside the massive Prada store, Peter Davidson, who runs this luxury hotel and its neighbouring, airbridge-connected, InterCon, was ready to dance with happiness. We have brought this old lady back to best in town, he said, pointing out that already, in six months since re-opening, it has soared on TripAdvisor from number 16 to sixth (I must admit that, as so often, I had not even heard of the tiny place that for some reason is top). Peter Davidson, incidentally, answers all TripAdvisor reviews personally, giving his full name.