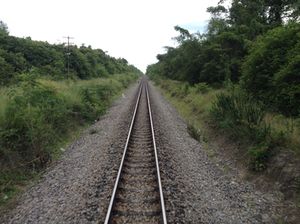 Watching the rails behind, to eternity…

There is something mesmerising about standing in the Observation Car watching over a thousand miles of rail stretching behind. This is one continuous houseparty here on the Eastern&Oriental, luxury-hotel-on-wheels travelling from Bangkok south to Singapore. Right at the moment only a Swiss who lives in Shanghai is out here and he tells me how he has sold his home back home, putting all his goods in storage, to be free. Free as a bird. Funnily enough we see dogs, and locals living by the track, and the occasional Buddhist monk, but no birds at all. This line was the same 20 years ago, when this train first started, as it is now.  Think of Tolstoy’s comment, that age and time rush past but you feel the same. 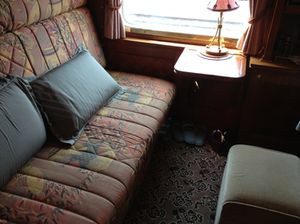 A Pullman Suite, by day

I go back to my cabin, State Suite D-4, middle category. Apart from the overall size, the fittings, as if perfected by the designer of a yacht – or an airline’s First Class suite – maximise every square inch of space. The wash basin is not big enough to bath a baby but frankly no-one would bring a baby, or even a child under about ten, on this unique train. Personal toiletries are stored in cupboards above the wood-seat toilet.  There are other shallow cupboards, with a safe, in the main room, which also has a closet with wood hangers covered in quilted, rust-coloured Thai silk. Bigger things can be stored in over-head copper and net racks. Pullman Suites have sofas right-angles to the one window, and these are converted into upper and lower bunks. In State Suites, by day, one outward-facing long sofa is parallel with the train, and, by the window, there is a single ‘sofa bed’, an upright chair and a pouffe that holds spare linens.  There are two US sockets under a folding table. State Suites have two big round-cornered windows, with curtains with elaborate ties, and pelmets embroidered in Malaysia, and behind-glass Venetian blinds. Colours vary: D-4 is soft teal and pale mushroom. 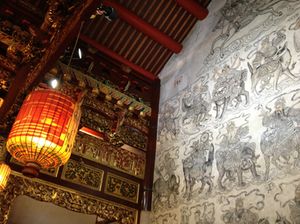 The second big excursion on this three-night journey is in Penang – we had an extra-long delay at the Thai-Malaysian border, where we also swapped engines, and onboard security guards.  Finally we pull into the concrete jungle that is Butterworth station, and most of the 111 of us pile out and into one of four waiting coaches. Coach three has a foot-tall model of the Petronas Twin Towers affixed to the top of the driver’s dashboard, and the kaleidoscope of coloured carpet – ceiling and floor – and tassels and so on that all coaches seem to have in this part of the world.  We head across the nine-mile George Town bridge to the old town of George Town.  While some others have tea and refreshments in the magnificent Eastern & Oriental Hotel, I have a tour of it with its boss, Michael Saxon (lucky me, he opens its new super-luxury tower next month).  This is the elder sibling to Raffles in Singapore, in that both owe their existence to the Sarkies brothers. 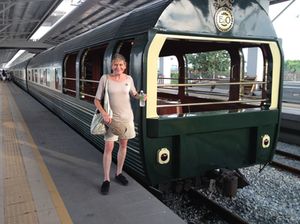 Boarding for the last time, at Butterworth

I could easily have spent many more hours at the Hotel (despite its name, it has no official connection with the train), but bicycle-pedalled rickshaw trips awaited. Our driver, probably 30 but, completely toothless and never having had a facial, he looked coming up to his century, had a horn that sounded like an emergency ambulance. We went to the Khoo Kongsai Klan Temple, a Chinese family-genealogy record, and back to the train.  Wow, beauty, you are 20 next month and yet you are so polished and loved you look almost brand new, though infused with history.  The anniversay train journey starting on September 19th, 2013, will be ultra special, two decades and still strong as ever. It will start with Singapore Slings and Champagne at Raffles, after which honoured passengers will be transported – I hope not by rickshaw – to Woodlands, to board the train for the journey north to Bangkok.  Along the way, you can choose, in Butterworth, a tropical spice tour or a Penang heritage tour.  Both culminate in a Peranakan lunch. 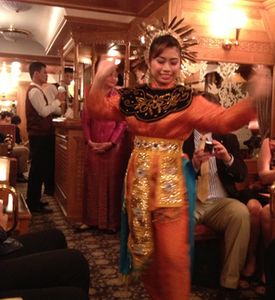 A local dancer onboard for the final leg

Back on the train, today, we have yet more entertainment.  As well as always-interesting conversations, say on the state of Albania’s trains by the English rail professional, or on the fashion and impressionism exhibition running at the Chicago Art Institute through September (this with a docent there, on her annual RTW round-the-world trip with her husband), and so on..  As well as such verbal entertainment, there are once-offs. An astrologer boarded at one point, telling people’s futures in a library that is surprisingly well equipped for its size. Mike plays the piano nightly in the bar, and local dancers boarded in Butterworth.   I watch for a time but have to leave the rest of the party to it – one mostly-Australian passenger complement apparently ‘emptied’ the onboard ice supplies at seven (a.m.) on one journey. 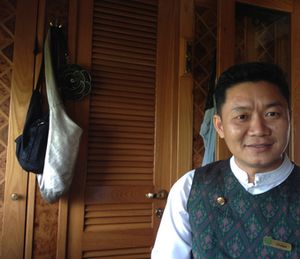 I am getting off at Kuala Lumpur.  Goodness only knows what time we will get there but the train seems to be in quite regular contact with people at the luxury hotel I will be spending the rest of the night in. My lovely, reliable attendant Chaiya – want to take him as personal Sancho Panza – insists I go to bed properly, here.  He has used the last of the three sets of linens from my pouffe, made up my bed, says he will wake me an hour before we arrive with coffee.  He does just that – the coffee is ultra-strong, full of flavour and comes with a purple orchid. We pull in, he gets out, with the Rimowa Porsche wheelie, which he hands to one of the two hotel staff waiting on an otherwise-deserted platform in an otherwise-deserted station. It is 1.30 (a.m).