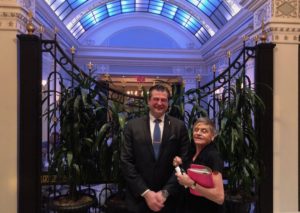 Washington DC stresses not only its political associations but its history, magnificently exemplified at The Jefferson Washington DC, a luxury hotel that Americans imagine, erroneously, the English town house to be like. The 96 bedrooms and suites, designed by Forrest Perkins, are certainly like some private-house guest rooms (‘spare rooms’, in English parlance) in which the gal has been privileged to stay – the difference here is that the hotel’s bedrooms have good WiFi, air-conditioning, professional lighting and the like.  See the video below of a Jefferson bedroom. 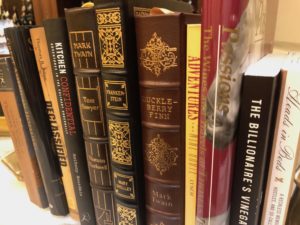 Books ready, on the bar counter

The Jefferson’s charming GM, David Bueno, is from Seville, but he has been in the USA since 1999. We tasted the hotel’s own-label Pinot Noir 2015 Willamette Valley as we waited for Ralf Schlegel’s dinner menu to begin in Plume.  Since it was awarded its Michelin star, says Bueno, the restaurant’s covers have doubled, and it definitely helps rooms business. There is a $102 three-course menu, and I started with heirloom tomatoes, stracciatella di bufala with smoked almonds and avocado sorbet, went on to wild turbot with ossetra, banana and green sorrel.  I heard about the hotel’s book partnership with DC Public Library’s Books from Birth programme, encouraging kids to read – this is supported by Dolly Parton’s Imagination Library initiative. 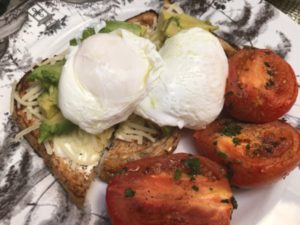 There was more avocado at breakfast, also in Plume.  Look at the image above to see how beautifully the grey-on-white Juliska Country Estate’s Reading Pavilion china fits so beautifully in the silver-grey and white colouring of the restaurant. Oh how important it is to soothe customers’ minds early in the morning, as here.  I saw avocado on the breakfast menu, in the form of avocado toast, and nobody turned a hair when I asked for avocado with my omelette, and it was jolly good, especially with lots of Starbuck’s coffee; I had in fact already had a coffee earlier, from an elegant silver urn in the hotel’s book room library. 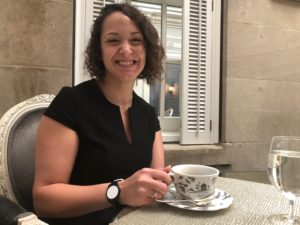 Breakfast was with Aly Aghamehdi, who looks after rooms.  She told me how many leisure guests turn up on the spur of the moment – hey, some might say, why not go to The Jefferson for an overnight? Well, if that happens and IF there is a spare room, Aly Aghamehdi can ‘personalise’ that room in 15 minutes.  She and her front office colleagues pitch in, helping housekeeping put in preferred pillows and other bespoke elements, which means by the time the arrivals actually get to their room, it is exactly to their liking.  Admittedly this is easier in an eight-floor hotel than in a high-rise, but even so, what a coup.  It is details like this that contribute to the perception of a luxury offering. NOW SEE ROOM 801