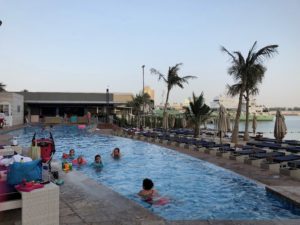 Colour in the pool…

Some of the older luxury hotels throughout the UAE hsve interiors that are predominantly one shade, dark brown. There is a lot of wood, admittedly, but even the paintwork is brown.  Fortunately, says the gal, when Abu Dhabi’s Jumeirah at Etihad Towers opened in 2011 it arrived as one massive jewel-box of colour – see the cabin of one of the six elevators, above (and yes, the blue hues are all real marble). There is colour round and about, too. Almost hidden behind the hotel is its private beach, with an adjacent pool. Actually the entire exterior is pretty colouful: the 382-room occupies the top floors of a shiny blue glass tower. 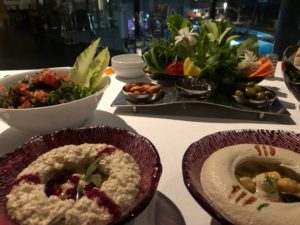 I had a multi-coloured dinner, too, in the Lebanese restaurant, Li Beirut. First, a barman skilfully made a Brockman’s from the gin trolley that does not seem to have any of the usual labels on it – Brockman, I discovered later, is based in Woking, England, and it seems to have been started more or less as a joke by four school-friends.  See, in the video below, how the mixologist pours the tonic from a bottle with a teaspoon in its neck to produce what looks like one single twisted flow. The next performance was the presentation of Ch Musar 2004 Gaston Hochar: it was decanted into one of those Riedel decanters shaped like a ballerina’s watering can.  I was with GM Stefan Fuchs, who had literally just flown in on Etihad’s nonstop flight from New York, and amazingly he showed not an iota of jetlag. We ate Lebanese, mezze followed by shashlik, the one-bite meat morsels taken off their skewers and served between pita breads. (On Monday – April 30th, 2018 – Li Beirut suggests an elaborate Lebanese menu, four courses: cold mezze, hot mezze, hot dishes that include shish taouk, shish kebab, kofta kebab and arayes, and, to finish, the irresistible umm Ali dessert, with date-almond icecream and date-honey biscotti.) 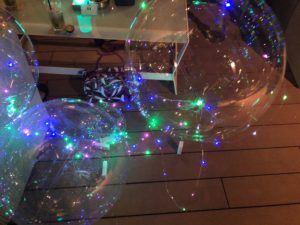 Afterwards we walked out to see that the barbeque on a terrace, full at last sighting, was, by nine p.m., empty except for a singer.  What happened? Tomorrow is a work day, I was told. We walked on round to another terrace, where some local groups were still enjoying shisha water-pipes. One group of three young women had balloons with inbuilt twinklers, adding yet more colour to the place. Up in my Sky Suite someone had used 340 deep red rose petals to write out ‘welcome back home’ on my bed. In the morning, `I looked down from my 59th floor eyrie at the vista of sea and sand, including yet more man-made islands awaiting yet more massive buildings, including hotels, and thought how the intense sun seems to whiten the sand, and lighten the water shades. 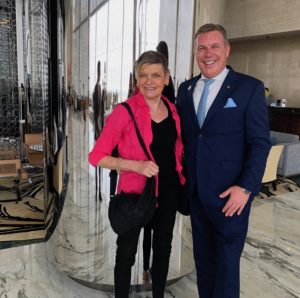 As with so many luxury hotels it is well worth either booking a room that gives access to a club lounge or paying the surcharge to use it. Here the 45th floor lounge is, of course, sophisticated, with stunning views.  A chef cooked whatever, and the buffet included such emirati dishes as date-flavoured muhalla crepes, a sweet balaleet vermicelli cooked with rosewater, saffron, cardamon and possibly topped with an omelette. I have not mentioned so many admirable features here, say the big gym, a myriad of other eating and drinking venues, and the lobby. OH the lobby, soaring up four floors to give a giant arena, as if waiting for its performers. A video below shows the shallow water feature at the rear, and the sakura cherry blossom display over a macaroon kiosk.  It does not do justice to the six ceiling-hung crystal balls, from Lasvit in Prague – each ball has 33,368 crystals.  At night these form a constantly changing sequence of colours of the rainbow. NOW SEE VIDEOS, IN ORDER, OF MY SUITE, AND THE GIN TROLLEY, AND THE LOBBY