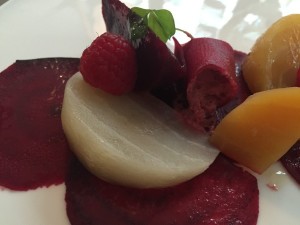 Mandarin Oriental Paris had yellow-clad dancers for its opening party. Now, as you know, the gal missed out on the ‘yellow woman‘ at the Negresco the other day and now, oh dear, something is missing at THIS hotel.  Archie Lewoof is away from Paris’ simply-beautiful 21st century establishment. Archie Lewoof, a Border terrier, is VP Pet Relations, and he sends welcome ‘how to behave’ letters to pets checking in with their owners. He lives 15 minutes from the hotel, he tells his visitors, but comes in by bicycle, with his owner, the hotel’s GM Philippe Leboeuf. He tells dogs that they will have a great time at the hotel but they are not allowed in the gym, the spa or Sur Mesure restaurant. That day, Archie was probably out of town …. never mind, there were lots of other things to talk about in Camélia restaurant. 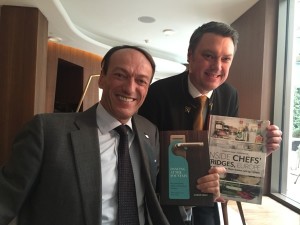 Philippe Leboeuf, seated and Adrian Moore show off their books

Its food. Look at this beetroot mélange. Brilliant, and boy did it taste good. Actually it was a pretty special day for Philippe Leboeuf. He is one of seven hoteliers, together with Luc de la Fosse and Greg Liddell, profiled in a new book, Dancing in the Fountain – the author, a marketing consultant called Conor Kenny, launched the book at the K Club outside Dublin. What is more, this very day hotel concierge Adrian Moore is launching HIS book, Inside Chefs’ Fridges, Europe, with illustrations by Carrie Solomon: later, he tells me that the Taschen party attracted 250, and he got two pages in Paris Match. Chefs include José Avillez, Hélène Darroze, Annie Feolde, Fergus Henderson, Pierre Hermé, Marco Pierre White and, from this hotel, Thierry Marx. With all this literary excitement we quite forgot to talk about how the hotel is doing and who will be coming to stay over Christmas and New Year. 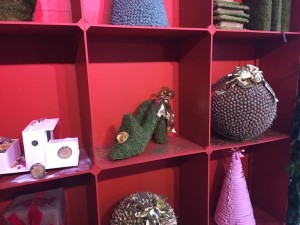 Inside the hotel’s front door…

The wall between the hotel‘s entrance, direct to the pavement of rue Saint-Honoré, and the main lobby has a ten-foot display of pink items, as shown. I left the hotel, and walked along Saint-Honoré past so many big brands. Alberta Ferretti, Balenciaga, Chanel, Chloé, Emporio Armani, Fratelli Rossetti, Gucci, Hugo Boss, Jimmy Choo, Michael Kors, Miu Miu, Roberto Cavalli, Tom Ford. Is that enough? I turned left and down to the still-boarded-up Crillon and then turned right, to find the entire first stretch of Champs-Elysées, from Place de la Concorde as far as the Rond-point, is one big Christmas market. Running through January, there are 160 chalets, set both sides of the avenue: they were specially made in Vosges, and painted white, and selling everything from Christmas decorations through to food. 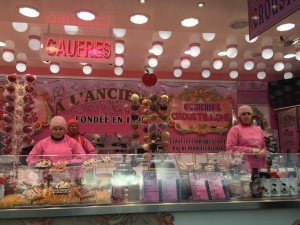 I heard that the first week, not long after the Friday 13th atrocities, the market did little business. But just as Parisians are determinedly going out, to bars and restaurants and other public places, to show defiance and determination, so they seem, also, now to be patronising this lovely market, which deserves all the support it can get. It is worth mentioning, by the way, that that ghastly evening Archie‘s owner was at home, left the pooch there but cycled over to his luxury hotel, and ordered a complete lock-down, not only the big wrought-iron gates at the main rue Saint-Honoré entrance but also delivery and staff entrances. He then had to try to ‘recover’ hotel guests who were dining outside somewhere. Vive la France!