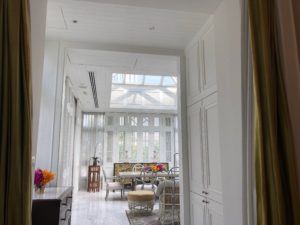 Looking to the Suite’s conservatory

The Ambassador Suite, #102, at Mandarin Oriental Bangkok is a microcosm of the entire history of Bangkok over the last 180 years. The 31 framed photos on the suite’s walls are so fascinating you wonder what and why… what was King Chulalongkorn doing with 11 morning-suited teenage boys at Eton College (it turns out the king, who lived 1868-1910, had 77 surviving children, including 33 sons, so it is quite possible he had 11 at that school at the same time).  His Majesty obviously packed a lot into his schedule.  As well as having what is thought to have been a total of 116 ladies, either wives or concubines, he also travelled extensively: see the photo of him above, in Russia with the Tsar in 1897. And he obviously loved having his photo taken, which in the 19thcentury meant posing for some time for each shot. 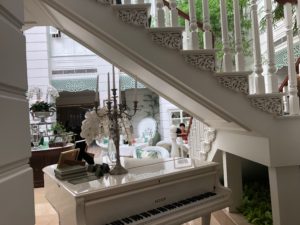 The Ambassador Suite, all 172 sq m of it, is up 24 carpeted stairs from the Authors’ Lounge, in the two-floor original 1870s hotel building: this, and the 1858-vintage Garden Wing behind it, constitute the entire hotel for the next few months. The River Wing is currently being dramatically being brought up to date by designer Jeffrey Wilkes, whose new-look lobby, with more wood, all champagne-white, and Lasvit chandeliers, was unveiled June 3rd.  When the rest of the renovation is revealed, bedrooms will be 4.5 sq m larger (Magic? Wait and see). There will also be magic in the re-done Verandah restaurant in the form of Chinoiserie wallpaper that promises to be as significant as the palms lining corridor walls at The Beverly Hills Hotel in Los Angeles.  Until this new wallpaper is revealed, breakfast is served in the all-purpose Authors’ Lounge – eat your papaya, watched over by photos of Graham Greene and his ilk. 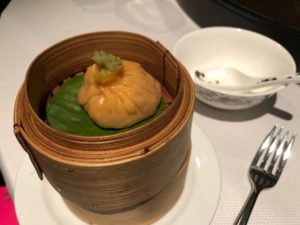 I took the hotel shuttle boat across the river, such a romantic prelude to pumping iron. On my way back to the boat I passed several expat guys in matching suits standing around rather self-consciously, listening to a string quartet warming up. Some guests for this, Wedding One, were having a little something, waiting for the bride. Back home, in the Ambassador Suite, I too dressed up. The hotel’s Provençal Manager, Franck Douin, was waiting and we went up to have a peek at Wedding Two, in the main Ballroom (the hotel does over 250 weddings a year and at this one all arrivals were photographed in front of a wall of flowers). We then walked across the hotel’s courtyard, its canopy a living fringe of greenery, for another ambassadorial experience… 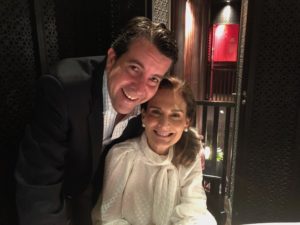 China House is a two-floor heavy wood building in Maccanese style, not surprising since apparently this was once the home of the Ambassador of Macau.  Lucky man. I hope he, too, dined in a small corner room that was just big enough for a circular dining table with an enormous Lazy Susan, and four chairs. Greg Liddell’s wife Victoria chose our meal.  We kicked off with truffle-filled dumplings in individual wicker lidded baskets, went on to a soup, a whole and magnificent Pekin duck, big chunks of fish with julienne of leek, and small portions of sweet and sour pork with fried rice, and broccoli.  We drank a New Zealand Sauvignon Blanc, Light Band 2018 Brightwater Nelson. Amazingly, just as I returned home someone in a mushroom-coloured Thai silk jacket appeared, with yet another glass of water, stemmed of course, with a purple orchid sharing its silver tray (and knowing this luxury hotel as I do, I bet you do not have to be Ambassador status to enjoy such luxury service at this thoughtful hotel). TOUR THE AMBASSADOR SUITE, AND TAKE A SHUTTLE BOAT ACROSS THE RIVER