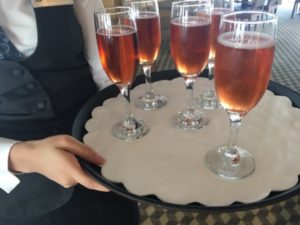 Cocktail hour (or choose your own)

Well what a surprise, in the nicest possible sense. The gal arrived at Tel Aviv’s historic luxury hotel to find it absolutely up to the minute, offering a unique stay. As of March 2017, the top five floors have been hived off to make The Vista at Hilton Tel Aviv – think Four Seasons Las Vegas or Nobu Hotel Las Vegas, both tucked into Mandalay Bay, but this is even better. Stay at The Vista at Hilton Tel Aviv and you can use all the facilities of Hilton Tel Aviv, say its gorgeous outdoor pool and big Technogym and possibly even the ongoing 12th floor Hilton Club Lounge, but not vice versa. The 167 rooms and suites that have been Vista-ised have exclusive access to the 17th floor Vista Lounge – see the video below, and then read on. Interestingly, the designer is that Turkish-top, Sinan Kafadar, who has done Four Seasons Hotel Istanbul at the Bosphorus, Four Seasons Istanbul at Sultanahmet, and Ritz-Carlton Istanbul (yes, he is a versatile creator). NOW, A VIDEO, AND THEN READ ON 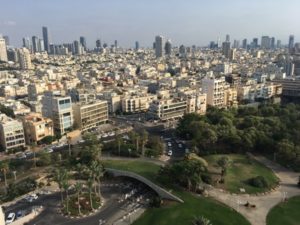 Looking back at the city

Simply described, the west end of the building’s top floor has been turned into a light-filled glass box, three sides of which are all glass, giving superb views far out across the Mediterranean, and, either side, along the city’s beaches and back to the city itself. The Club’s fourth wall supports the eatertainment area, where from 6.30 a.m. on you have way above-par offerings, with the most international food with a Californian flair (I think everyone from Alain Ducasse to Wolfgang Puck would approve though since this all comes from the hotel’s dairy kitchen they might miss their foie gras). I could easily live off the local fresh produce, and arrays of cheeses and smoked fish, and I did, breakfast and a full-scale dinner, also included. Shabat coffee does lose its flavour, being kept hot for up to 24 hours, but that is only Friday evening and Saturday daytime: seven days a week, the drinks cabinet is opened, from tea time on, for a good tasting of Israeli wines, or Absolut and other spirits, and glassware is fine-dining style. 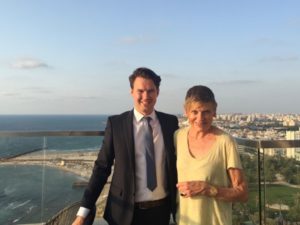 The Vista Lounge has big balconies, as do many of the bedrooms. Cleverly, in 1965, when the hotel, originally the idea of Teddy Kollek, opened on 4.5 acres of absolutely prime land, the architects, Yaacov Rechter and Hilton’s own Osvaldo Turo, had made sure that every single room faced the beach: my room, 1606, looked south along Banana Beach and Charles Clore Park, to Jaffa in the distance. Being a Saturday, and gorgeous weather as is the norm eight months a year, the entire outdoor space was dotted with people lazing on the beach, and sailing, surfing and swimming in the sea and, on dry land, walking, running and cycling or scootering on a variety of wheels (there is no public transport during Shabat). The whole panorama was a blend of L.S. Lowry meets pointillism. 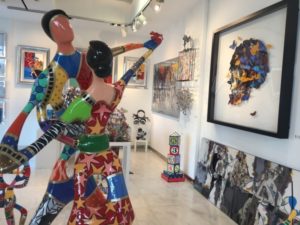 Talking of art, there is lots to see here, even without leaving this luxury hotel. I admired a couple of six foot-tall stone and metal sculptures, one at the Vista Lounge entry, by the Winnipeg-born Israeli sculptor, Eli Ilan, 1928-1982. I was also fascinated by the lobby’s art gallery, sadly, like the mammoth H. Stern boutique, closed for Shabat. Fortunately the staff work nonstop, and Stig-John Ceulemans, who heads Business Development, came in (from the beach?) specially to explain that since Tel Aviv is unlikely to have a Conrad or Waldorf Astoria in the near future, Hilton and the owners of this property wanted to offer a yet more superior product. I was impressed, right through to my departure, pre-dawn again. The Miss Israel look-alike on front desk down in the lobby – the Vista Lounge was not yet open – had perfectly done sapphire-blue nails. She said my pre-ordered taxi was waiting, and the athletic 40-ish male driver was indeed ready to go, somehow managing two mobile phones as we sped away. WANT TO SEE WHAT ROOM 1606 LOOKS LIKE?  SEE BELOW