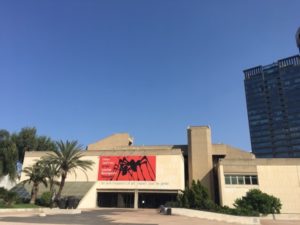 Like over three million others this year, the gal decided to visit Israel. An influx of additional airlines to Tel Aviv’s Ben Gurion airport has meant lower airfares all round (the Israeli Government gives a grant of €250,000 for each new route, which has allowed low-cost carriers like Wizz Air to be creative, and Hainan Airlines to add Guangzhou to Beijing, now daily, and Shanghai).   Incoming tourism is already up 26% January-June 2017 over 2016. All this is, of course, good news for luxury hotels, and HVS is anticipating last year’s figure of 67% average occupancy to be bettered this year, though average rate will probably remain steady at $202 and revenue per room $136.  Yesterday, Tuesday September 5th, 2017,  the Mayor of Tel Aviv, Ron Huldai, hosted the eighth Tel Aviv Cities Summit at the stunning Tel Aviv Museum of Art (TAMA), currently showing a Louise Bourgeois exhibition. 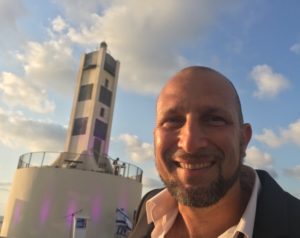 Entrepreneur Sharon Gal Or of TING, The Innovation Nation Game

On Monday, he had thrown a memorable cocktail outside on the boardwalk at Reading Park, next to the Reading Power Station, on the north bank of the Yarkon River. We gathered pre-sunset, in sweltering heat and joining long lines at the main drinks station – I have never drunk so much grapefruit juice in my life (who wanted wine in this temperature?). Cyclists, on a variety of two, three and even one-wheeled machines, continued their obviously-regular exercise along the circuit next to the boardwalk. Soloists from Tel Aviv Opera sang, from half way up the lighthouse – see the video below – and the Mayor explained its history. He is shown in the photo at the top of the page. 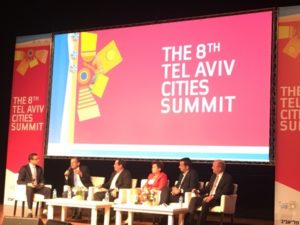 The lighthouse was built by Brits 1934-1935, and operated until 1965. It was on a stamp issued November 2009 and has appeared in many film, including Late Summer Blues. The Mayor handed the lectern over to the charismatic Major General (retd) Noam Tibon, who said he hoped innovation would help pave the way for cooperation in the Middle East. I later checked Tibon online, found his military service stretched over three decades, half of which was in combat in Lebanon or the West Bank. He is an ardent campaigner for cooperation: he posted on matzavblog.com on May 20, 2017, a plea to the President of the USA: ‘the pragmatic Arab world is our partner, the Arab Peace Initiative needs to be adjusted but it should be made the basis for negotiations’. 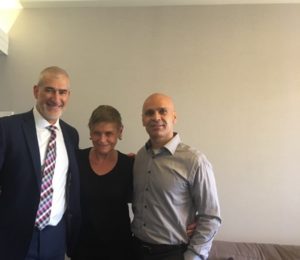 And then, yesterday, the eighth annual Tel Aviv Cities Summit started a quarter of an hour after its scheduled 10 am kick-off. The main session, morning long, concentrated on cities as beacons of democracy, and among the thousand or so delegates were representatives from over 150 cities, including such speakers as the mayors of Tirana and Warsaw, both highly-articulate and fluent English speakers. Hanna Grokiewicz-Waltz spoke of mobilizing her city, Warsaw, so far successfully, against ‘reforms’ proposed by the current national government. And then the brilliantly witty mayor of Tirana, Erion Veliaj, was so spell-binding that for the first time in my life I actually want to visit Albania. Next came keynote speaker George Papandreou, who relayed the power of Ancient Greece, where everyone took part in politics and held public office at least twice in their life time, but today globalisation has broken traditional mores and money has overtaken the role of politics, thus undermining democracy  (it is worth noting that the next Athens Democracy Forum, whose sponsors include Costa Navarino, is scheduled September 13-17, 2017, athensdemocracyforum.com). Anyway, back to Tel Aviv… after a somewhat fragmented lunch break, the event then split into niches. These included healthy eating, led by Amsterdam’s Prof Jacob Seidell, VU University, and tourism. Here, luxury hotels were particularly covered by Rom Hendler’s panel of startups, where he presented Michal Hubschmann, VDroom; Orit Strauss, GivingWay; Michael Weiss, bitemojo, and Deddi Zucker, BooksOnMap. NOW SEE A VIDEO OF THE MAYOR’S COCKTAIL