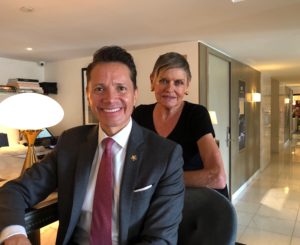 A literary event was going on that night at Viceroy L’Ermitage Beverly Hills. The luxury hotel’s Colombian GM Diego Heredia has just signed an ongoing partnership with Assouline, and, through October 2018, part of the rear of the lobby is a glass-walled pop-up Assouline bookstore. That evening there was a book-signing for Donald, The Book, an anthology that had nothing to do with the present incumbent of the White House – no, it is a collection of watercolour fashion illustrations, from Vogue and similar publications, by artist Donald Robertson.  He, Donald R rather than Donald T, was there and, says the gal, some of the guests were so outrageously clad, with tall hats dominating, that he looked positively Brooks Brothers by comparison. 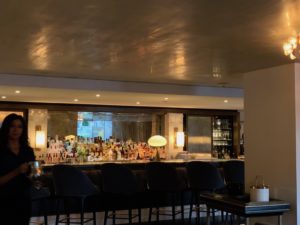 I had a meeting with Viceroy’s technology specialist to hear how he has cleverly persuaded Samsung to load the Alice hotel employee recording app into its big-face Samsung Gear watch.  And I had an equally intriguing meeting, over dinner, with Diego Heredia. The 116-room hotel, currently still owned by a now-quiet Malaysian, Low Taek Jho, better known as Jho Low, is currently Travel+Leisure‘s top hotel in the whole of the greater Los Angeles area. 60% of guests are American and, says the GM, they come here for discretion – competitors around are more for the see-and-be-seen crowd.  Here, you do not know who is dining at the next table, especially since curtains, at right angles to the wall, give semi-privacy. 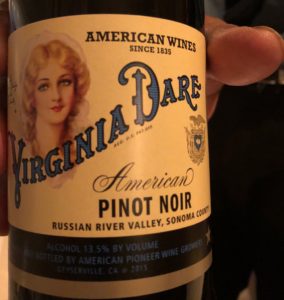 The menu is typically modern-American – I had salmon belly crudo with passionfruit, avocado, hemp seed, radish blossom and amaranth, and then hotel-made garganelli pasta with beef cheek ragú.  The dessert card, with a Jean André blue-wash watercolour of a woman’s head, offers a so-American candy cart, and a Californian goat cheese, Humboldt fog, wrapped in ash. We drank that most American of wines, a 2015 Virginia Dare Pinot Noir, named for the first child born to settlers in Virginia, in 1587 (no-one knows what happened to her but her name has been used not only for wine but also for places in North Carolina and elsewhere in the southern USA). Virginia Dare wines, in Geyserville CA, were bought by Francis Ford Coppola and his family in 2013. 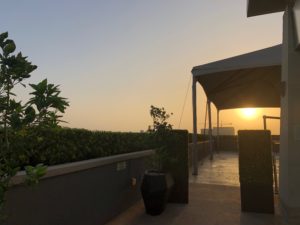 In the morning, I stood on the balcony of suite 518 and watched the sun come up east along Burton Way.  I headed to the eighth floor Technogym, which opens at 6.30, and went up 16 steps to the rooftop pool, its 23 loungers and four cabanas all set up for privacy-seeking celebrities, arriving in a few hours.  Back down in the restaurant, one instantly recognisable artist, was already eating, and soon his PR people arrived to join him.  I concentrated on my Little West Organic Cold-Pressed Go Big juice – beet, kale, carrot, apple, wheatgrass, lemon, ginger – and counted the baby potatoes that came with plain, please, omelette.  Sixteen. NOW SEE ROOM 518