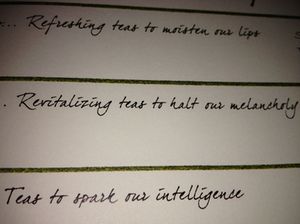 Luxury travellers have morning routines.  They do not want to be talked to by gym attendants at 0600, they want their coffee as soon as they sit down at breakfast.  Some, of course, want tea, and a few might even still ask for the oh-so-yesterday diet coke. At another of Canada’s financial centre’s new luxury hotels, Shangri-La Toronto, all the offerings in the Breakfast Collection come with fresh-squeezed juice and French press coffee. That, and the listed bacon sandwich with one egg sunny side up, sounds just the kinda thing before heading across to Bay Street (Toronto’s Wall Street) to do a few deals…. but the gal’s eye is taken by the hotel’s Tea Menu.  The cover is in Chinese, but open up and you see listings in English.  Here are Oolong teas, said to spark intelligence.  Right, that sounds good.  There is Iron Goddess, a light Oolong from Fujian with an unbelievable floral and sweet fragrance, and Wuyi Rock, a dark Oolong with deep earthy tones from the Wuyi Mountains.  Research is needed.  First Oolong, which is the process of withering of picked tea leaves under a strong sun, to produce between eight and 85 percent oxidation before curling and twisting.  Next Wuyi, a place in the northern border of Fujian province that I have not yet visited.  Its mountains, I read, are a UNESCO World Heritage Site for biodiversity. 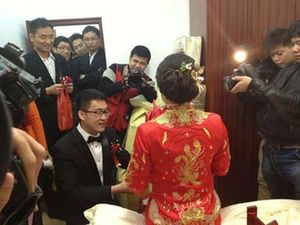 All well and good, but Fujian fascinates me.  This is the area of China which many smart people left in the 19th and early 20th century to settle in the cities of south-east Asia.  Many of today’s wealthiest Malaysian Chinese, Singapore Chinese and Thai Chinese are part of the Fujianese diaspora.  Some who stayed behind have done well too.  Want China Times, on January 1st, 2013, reported an eight-day wedding banquet given by Wu Ruibiao, Chairman of Fujian Jinjiang Wanli Ceramics, for his daughter. Her dowry included Wanli shares worth over US$16 million, $3.2 million in cash, a Mercedes-Benz, a Porsche, several houses and so on – with, thankfully, a further $2.4 million donated to charity. 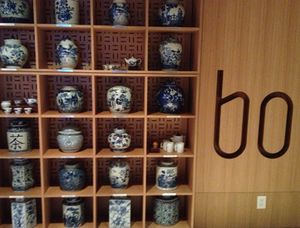 Shangri-La Toronto takes tea seriously. The lobby, where real koi swim under a glass panel in the floor, and a couple of finches, Reggie and Ronnie, twitter in their cage overhead, and where a real two-sided gas-fuelled fire burns 24/7, also has two walls of ‘bookshelves’ filled with exquisite blue on white decorated teapots.  Up in room 1741, on the top (hotel) floor of what is a 65-floor skyscraper, I find Dilmah teabags to go with the espresso machine.  I am reminded of meeting the Dilmah trio – Merrill Fernando and his sons DILhan and MAlik – last time I was in Sri Lanka.  Not only do they produce great teas, they do so much good through the MJF Charitable Foundation. 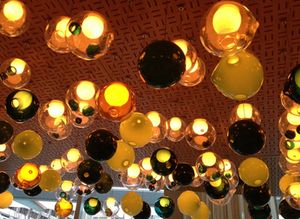 Lights above the bar counter

This hotel, by the way, is entertainment hub of town.  Once the business tycoons have packed up for the night and gone home, the younger crowd comes out.  Some are at the bar counter, under an overnight light display of coloured light bulbs. The lobby becomes a network buzz of who is doing what, why and when and where. A grand piano is put to good use, and there is always a live act on weekend nights.  For those who know the right people, or who are sensible enough to have bought global membership of any Soho House, Soho House Toronto is the three-floor brick building immediately behind the hotel.  I am taken in, to find hundreds of Toronto-troopers showing latest (sorry, change that to different) styles of fashion, yakking and quacking as they await the start of tonight’s live performance, due for ten but it is now past that hour. 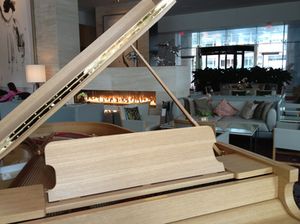 Shangri-La Toronto is only a couple of blocks from the TIFF Bell Lightbox building, headquarters of Toronto International Film Festival TIFF, which this year, directed yet again by Cameron Bailey, runs from September 5-15, 2013.

Far far ahead, long before TIFF looms on the horizon, it is film producers who make the bookings for their stars and hangers-on, but do not expect anything to happen on time.  If you think, say, Big Star is coming down from his hotel room for a presentation at a certain hour, he might come down half an hour ahead, or an hour late. He might, alternatively, be smuggled out via the underground carpark. 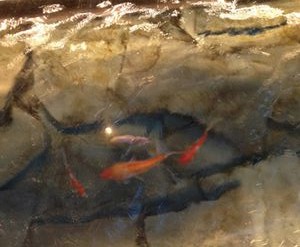 It is all lots of fun, rather like staying in this 202-room hotel.  Where else is my room highlighted by colourful origami birds – where else do you walk out, under two real finches (and dozens of silver bird sculptures hanging from the lobby ceiling), and over real koi?