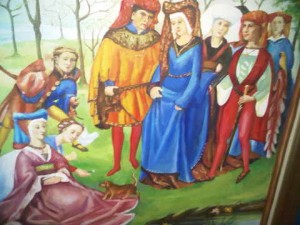 Are they looking for the teapot? Painting on the wall of Blue restaurant, The Venice Hotel, Shenzhen

Some have creative brains, some have organised brains, and some combine both.  Think David Neeleman, who was just being interviewed by Four Seasons’ Katie Taylor on BBC World: he created JetBlue and made it a trend-setting airline and now he has gone on to his next airline, Azul Brazil.

Think, if one must be honest, of Sheldon Adelson, who created the idea of the Las Vegas Sands empire, in Las Vegas itself, and now also in Macau and Singapore.   Well, guess what, there is a half-size ‘Eiffel Tower’ here in Shenzhen, China, and the gal saw it on her way to lunch in Blue.

Actually Blue is blue, small B, but I always find it impossible to put small-letter names into main text.  Blue is the Italian fine dining restaurant in the awe-inspiring The Venice Hotel Shenzhen, which until January this year was the Crowne Plaza.

Then the owner, an anonymous man who does not wish to become Sheldon Adelson Mark II, said he would run the 375-room himself, or rather with the help of a GM, Ralph Wang, and a highly experienced food guy, Matthew Siegel.

Siegel has six restaurants to run, plus about 19 weddings a month (the perfect wedding venue, he says, is around the gorgeous outdoor pool), plus other banquets.  Blue is the signature restaurant, so popular that regulars drive from Hong Kong, at least 75 minutes away. 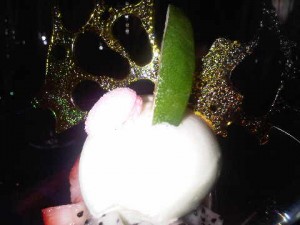 Addicts love the decoration, including ‘mediaeval’ paintings on some walls, and they love the wine list and food prepared with such enthusiasm by Venetian Alessandro Dal Zotto, who just copied his mother and took his cooking skills from there.

Alessandro came in specially to do lunch, with antipasti, his specialty angel hair pasta with lobster and, for finale, a mouthwatering lemon sorbet on top of fruit chunks.   This went with a tasting of Torbreck The Steading Shiraz 2008, which will be presented by winemaker David Powell at a Blue dinner on October 30th, 2012. 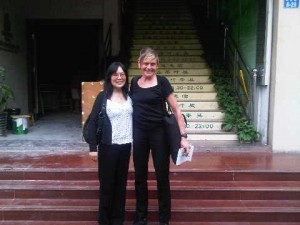 After that we went exploring.  Matthew and Tiki Siegel showed off the Nan Shan Tea City, which you can only find if you know it, so to speak.  Who would have thought that such an uninspiring set of steps would lead up to the most exciting tea emporium in the world.

Out on the pavement men are hauling big cardboard boxes, taking them off to distributors and restaurants.  Each box could be worth thousands of renminbi.  To the Chinese, tea is one of the seven necessities of life, along with firewood, rice, oil, salt, soy sauce and vinegar.  Where do sex and making money fit in? 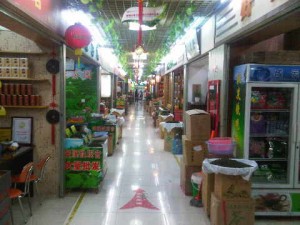 Chinese drink tea throughout the day, including at meal times.  They drink tea for pleasure, and for sustenance, and have have done for yonks.  One story has it that it was an emperor no less, a certain Shennong, who in 2,737 BC first ‘discovered’ tea when a leaf of the Camellia sinensis plant fell into the water he was boiling.

Lovely story but surely, since emperors could not even wipe their own backsides they would not have been boiling their own water.  And the accuracy of the dating is suspect, too.  Here at the tea market the men are the bosses, one suspects, but it is women who do all the work.  From 0930 until 2200 every day, some of them are sifting the leaves, by hand. 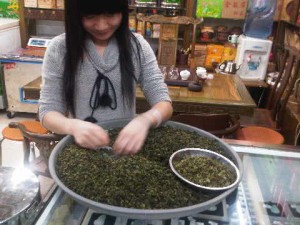 Be that as it may, tea is the most-consumed beverage in the world.  To Americans, iced tea is the ubiquitous drink at conference lunches (horrible) and for normal people, too.  To the English, a couple of generations ago, tea was supposed to be so strong that it was said the teaspoon would stand up in it by itself.

To this particular English woman, tea is yet to be discovered. Even dispassionately, however, walking the aisles of the Nan Shan Tea City is an amazing experience.  Each store is open-fronted, about ten feet wide, and about 18 feet deep, its walls lined with shelves, completely filled. 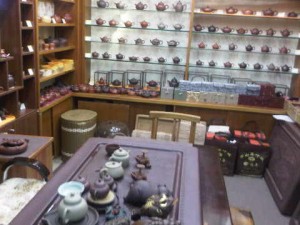 Some shops offer every type of teapot imaginable

Some stores display teapots, from ceramic vessels holding barely a thimble-full up to glass structures and even big plunger-type vessels.  Here there is a display of holding trays, like the ones used at the tea demonstration in Xiamen a couple of days ago.  All the trays, regardless of their shape, style and size, have grills in the top to hold water, and a tap or cork below to allow that water to escape.

Other stores merely stock hundreds of types of tea leaves: most researchers say that taking the five distinctive categories, black, green, oolong, white and post-fermented, there are at least 700 different types of tea. 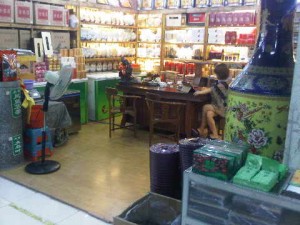 Every shop at Nan Shan Tea City is a treasure-trove

The world’s most expensive tea is said to be from Sri Lanka, an Adams Peak White Tea, costing £13.12 per ounce.  The highest-price Chinese tea apparently is Dragon Pearls Green Tea, retailing at $4.37 per ounce.  It is made from the top two leaves and the bud of new season growth.

These fragile leaves are then hand rolled into the small pearls. If you see small ‘hairy down’ on the bud of the leaves it denotes superb quality and very careful and delicate handling. The most expensive high tea is not far away, at the Ritz-Carlton Hong Kong, according to a website called Mr Top 10.  They say it costs HK $8,888 per couple. Of course I check.

In fact this luxury hotel – the tallest in the world – offers a Red Carpet Afternoon Tea in its Presidential Suite. It comes with butler, violinist, a private showing of Graff diamonds, Vera Wang Wedgwood china, and Baccarat glassware on Frette linens, and it costs HK $18,888.  For two. Taxes extra (and taxis, there and back…)