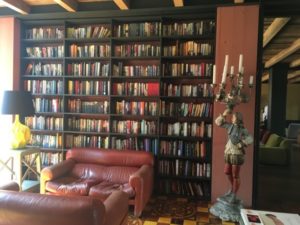 The Rooms lobby has walls of real books

The gal was in Tbilisi for a variety of reasons, which of course included checking on the Georgian capital’s hotels. There are so many unusual and creative features. Elevators at Adjara Group Hospitality’s Holiday Inn have big wall charts showing that if you want to avoid busiest breakfast times, do not go between eight and nine. Clever. At Adjara’s smile-evoking own-brand Rooms Hotel Tbilisi, working traffic lights in the street outside let you know, as GM Levan Berulava shows, above, whether its restaurant is open or closed. Head into the design hotel’s lobby and one part of it is completely lined with real books, at least 500 of them to browse, read and borrow. 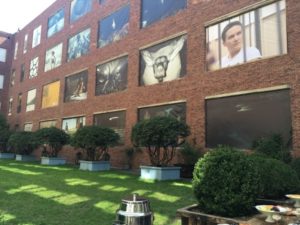 The rear of Rooms Hotel is an old courtyard, now beautifully grassed, and ideal for meetings and parties: defunct windows of the courtyard’s rear wall, which must have had an old building behind, are now filled, completely, with art photos, including one of Ukraine’s fighter pilot and modern Joan of Arc, Nadiya Savchenko, imprisoned in Russia (is it a coincidence that a former Georgian president, Mikheil Saakashvili, known as Misha, is now Governor of Ukraine’s Odessa Oblast?). These photos will change with next month’s annual Kolga Tbilisi Photo, opening May 12th, 2016, says Levan Berulava. See the video, below, to see more of the courtyard. He takes me up to have a look at the only one of his 130 rooms not currently occupied. It reminds me of a Buddha-Bar hotel, with dark colours, antique furnishings, an old-fashioned bakelite telephone, and a bathtub in the main room. 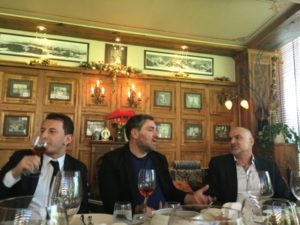 Lunch at the boutique Vinotel

Later, much later, it seems, my programme includes lunch, at the antiques-filled Vinotel. Our table manages to seat about 16 with ease, which is a good thing as an increasing number of guests fly in – two Georgian diaspora, one living in London and the other in New York, arrive about 3.45 pm. More and more shared appetisers are put out, at intervals of about three minutes – no half-used dishes are ever removed. I never remember eating so many cheeses, a variety of local cheeses, and outstanding baked cheese, which is to say deep fried. There is cheese in puff pastry, cheese in lightest flat bread. There are also, fortunately, bowls of Georgian salad, so I had my daily fill of the world’s best tomatoes. I kept waiting for main courses to arrive but I am not sure if I missed them, or whether they were destined for later, but I had to get on. 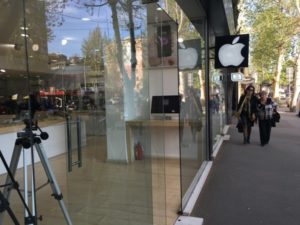 I wanted to look outside the world of luxury hotels and walk the streets, and from Holiday Inn Tbilisi I headed west along Pekini Avenue which would not be easy for anyone vulnerable to falling down holes or bumping into obstacles, which might even be a dear little scarf-wrapped granny selling enormous red poppies. But, I quickly wondered, where else do you find three Apple Stores, albeit not as big as New York’s Fifth Avenue one, in the space of 300 yards? This really is a most intriguing city, and the people are so friendly.