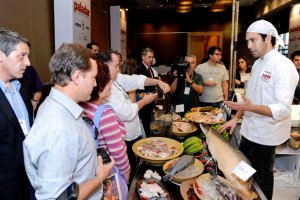 One of the 41 chefs at Paladar

Some gals (not me) rush to any food event, perhaps to fill-up or meet people. I was told at Grand Hyatt Sao Paulo – which always feels like home when I am back in this vibrant, but often gridlocked, city – that wine tastings are good places for achieving- singles to meet a possible partner.

Sadly, at the Grand Hyatt, I missed, by one night, the fourth annual Paladar Cozinha do Brazil, which the hotel hosted in partnership with O Estado de S. Paulo newspaper, July 29-31, 2011. In all 41 chefs and 22 ‘others’, who included sommeliers, barmen, writers, consultants, winemakers, and assorted complementary experts from across Brazil, offered unique opportunities to learn more about great, and regional Brazilian, cuisine.

The participating chefs included Alex Atala, of the renowned D.O.M (one of the UK publication Restaurant Magazine’s 50 Best Restaurants in the World) and his newly-opened Dalva e Dito, in São Paulo’s trendy Jardins, www.dalvaedito.com.br. He, and other chefs from the Northeast, South and Central Brazil areas, discussed and shared experiences.Another partnership, with Estácio University, allowed students to participate in support roles as apprentices during this important food and wine happenings.

The forever-young Grand Hyatt São Paulo opened, in what was then a pretty deserted part of São Paulo, in Morumbi on the banks of the Pinheiros river, in 2002. Today, the 466-room hotel is surrounded, at close quarters, by burgeoning IT, finance and manufacturing headquarters.

Run by Parisien GM Thierry Guillot, the hotel is always slightly ahead of the trend curve: this September sees the opening of an in-hotel boutique named for the century-old Granado exclusive apothecary. I was lucky enough to stay in a room that had access to the hotel’s stylish 20th-floor lounge, run by Manager Thiago Abreu and his team. I was also lucky enough to be the only partaker, at both visits, of the 15-metre, nicely-warm, indoor pool – by contrast, the Technogym was incredibly busy early morning. 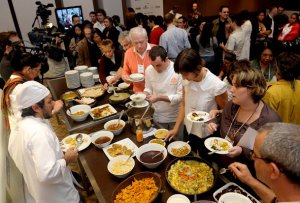 Another view of Paladar at the Grand Hyatt Sao Paulo

Pride of place in the hotel’s own culinary offering, by the way, is the modern-French Eau restaurant, masterminded by Charentes-born chef Laurent Hervé. His printed menu cleverly identifies source of all products. You might, for instance, start dinner with a local-origin organic salad, and go on to Uruguayan beef, say an outstanding ribeye, with your choice of organic vegetables.

Our party of four paired our assorted dishes with Malbecs from Mendoza in Argentina, Afincado 2006 and Angelica Zapato 2007. After such a dinner, honestly, it was merely time for bed. What a way to end such an enjoyable, and satisfactory, day in bustling São Paulo, Brazil. I cannot wait for tomorrow, or at least to come back, www.saopaulo.grand.hyatt.com