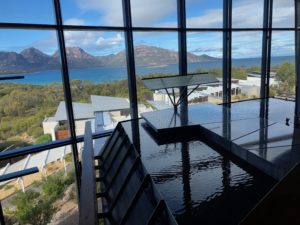 Well, the gal was in for a treat at Saffire Freycinet, undoubtedly one of Australia’s top luxury resorts and said by some to be world-beating.  As the image above shows, the main block is shaped like a giant stingray, with 20 detached villas beyond its head. These villas all face across Oyster Bay to a promontory with a skyline of the five Hazard mountains, the tallest of which, in the middle, is the 485 metre-high Mount Dove. How did this resort, which opened 2010, come about? The Farrell family’s Federal Group wanted to extend their Tasmania gaming monopoly, and to achieve this they had to build a resort. Fortunately they had a caravan park in Freycinet National Park that they were prepared to sacrifice. 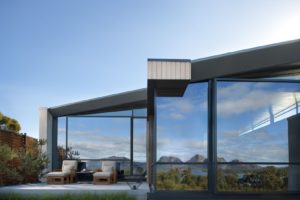 The original idea was for a 120-room lower-level operation but eventually the Farrells chose architect Robert Morris Nunn’s plan. His villas, all 20 of them, are more or less similar, each like a giant 80 sq m, or slightly larger, sculpture.  I was in #08, named Devonian, which had simple concrete or wood walls and one all-glass wall, all the better for that view across the Bay. I just wish I had had more time to spend in it. Like everyone, I was met at Hobart airport and, after coffee and a tidy-up in the resort’s dedicated arrivals lounge, after picking up baggage, I was driven the 2.5-hour scenic route to the resort by one of its four, Hobart-based, drivers. 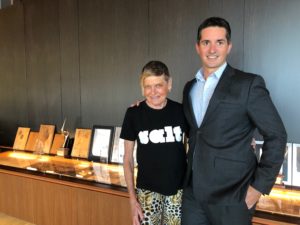 Saffire Freycinet is all-inclusive, in the Regent Seven Seas cruise sense, like ALL inclusive, and ALL the best. The food is fabulous – I loved the big bowls of Neil Perry-type healthy salads on the lunch buffet (my water came in a Riedel tumbler, but if I joined others in a midday wine-tasting it would have been in Plumm stemware). At dinner my Pacific oysters were paired with 2017 Wineglass Bay Sauvignon Blanc from Tasmania’s east coast. At breakfast I could have had Saffire muesli or porridge, and the highly popular breakfast bowl (haloumi, sweet potato hummus, beetroot relish, avocado, poached egg, sesame dukkha and linseed sourdough).  As the GM, Ross Boobyer, says, food is one of the many reasons people return again and again. 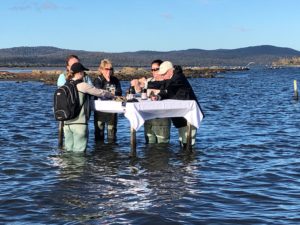 Another addictive draw are the 14 complimentary activities, top of the list being the oyster experience. Ten of us were loaned hotel weatherproof jackets and torso-covering rubber waders. And wade we did, through the shallows to see and learn about baby oysters, pea sized, growing in wire mesh dormitories held permanently in and above the water. And then we waded some more, to a firmly-planted table that Bianca, one of our minders, had set with white linen, and Plumm glasses. She scooped dozens of mature oysters from an older-mollusc dormitory, shucked them and we ate, and drank a local white until the quorum had had, well almost, enough. And then it was back to our luxury resort to watch the sunset. See why this place is so extraordinary? SHARE EXPERIENCES, BELOW, OF VILLA 8 (DEVONIAN), NICOLE’S OYSTER INTRODUCTION, AND CYCLING ALONG THE BEACH