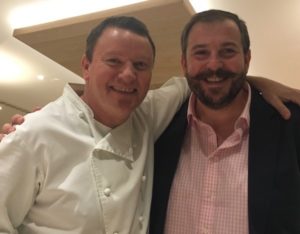 Wow, it was all of 11 months since the gal had been to InterContinental London Park Lane, one of the city’s two most-central hotels (distances are measured from Hyde Park Corner). Things looked even better than ever. All the men behind front desk and conciergerie wear stunning English tweed suits. The flowers, particularly suitable for this week of the annual Chelsea Flower Show, are more striking than ever. And there, in what is at the moment the luxury hotel’s only celebrity restaurant, was its chef-patron, Theo Randall, who came over to talk with his friend and colleague, Simon Burdess, who heads food, all brands, for IHG Europe. 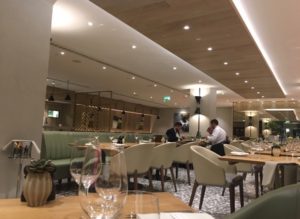 Last time I ate at Theo’s the room, an interior space admittedly, was somewhat sombre. Now, redesigned and light and airy, it is absolutely uplifting. I love the colours, the lighting, and the simplicity. Beautiful wood tables, so smooth I could not stop stroking the edges, are not encumbered by cloths, which are, I fear, fast going the way of the dodo. Napkins are simply folded, held in paper bands. China is plain Villeroy & Boch, cutlery is Robert Welch. The menu, a simple A4 sheet on a clipboard, changes daily, but always offers a five-course tasting. We, Simon and I, naturally went à la carte, in my case two starters. First, however, we were brought two amuse, large plates-to-share of bruschetta of tiniest on-the-vine tomatoes and absolutely irresistible zucchini fritte. It does seem that, like his restaurant’s look, Theo Randall has simplified his food. 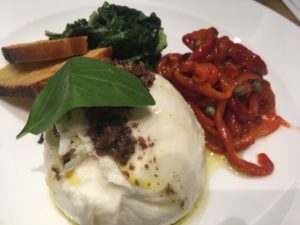 This, clearly-identifiable great ingredients presented with love, is obviously what today’s gastrophile market wants – Theo already has one offshoot, and more are about to be signed. But those fresh ingredients are essential. Just as I found in the Los Angeles area a week ago, diners are increasingly insistent that produce should be organic, with details of its provenance listed. Today, however, Simon’s conversation was so fascinating I simply did not have an opportunity to note the source of my burrata, topped with finely-diced Taggiasche olives, and, to the side, grilled marinated red peppers and Swiss chard (see what I mean about simple presentation?). I went on to carne salata, thinly-sliced black Angus beef topped with zucchini shavings, rocket, pine nuts and parmesan, all in all a perfect pre-flight meal. 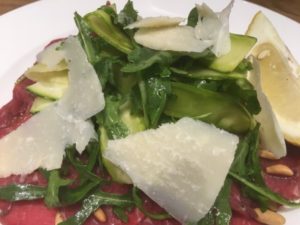 Yes, says Simon Burdess, the man who knows – he moved to IHG after re-positioning restaurants at Fortnum & Mason. Today’s cuisine is predominantly premium-casual, and trendy consumers are flexitarian, eating meat at one meal but not necessarily the next. One moment he was recounting one of ‘his’ forthcoming IHG restaurants that will heavily feature venison, the oldest meat beloved of carnivores (this man is a history grad), the next he was sharing details of Wyvers Bar and Restaurant, which opened last Wednesday, May 24th, 2017, in Europe’s first Kimpton, Kimpton De Witt. There, apparently, you find an American gastropub, by Sam de Marco – and do not forget to try the cocktails – a favourite is a mostly-green Garden of Eden, created by Kimpton’s own mixologist, Mike Ryan. Luxury, it seems, means hotel groups offering a variety of interesting dining and wining experiences.