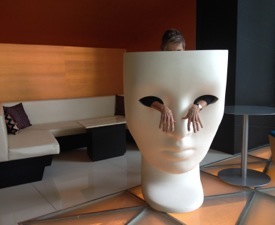 And now it is time to look at raising the luxury hotel stakes. Take a case study. W Mexico City opened in December 2003 and the gal remembers how its ground floor lobby, entered via a black tunnel, was dark and mysterious, with a several-level flowing river inside, that had real koi in it. For the last year it has been rising, Phoenix-like, into something that is light, beautiful, airy and uplifting. Look at one of the lobby chairs, apparently German and ‘quite’ expensive. 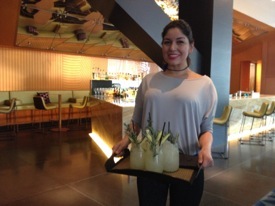 Welcome in the new lobby bar

At the other end of the lobby, more face-like chairs, all in white, congregate like disciples around a ceiling-high dark blue glass tower, somewhat odd-shaped, that lights up at night (peer in and you see Yorick, or similar skull shapes). The designer is one I have not come across before, Anurag Nema, but he worked with David Rockwell and then with Studio Gaia, who did this 239-room hotel first time round. There is a bar in the unisex washrooms leading off the lobby – yes really – and there is another, big, bar in the lobby itself, with odd-angled mirrors over for weird distortions. 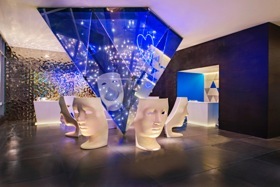 Lobby at night, with an inner-lit column

There is a lot of fabulous drinking in this place, by the way. Once the non-stop creative GM Benoit Racle had shown me a mock-up room (now all light-bright, with the wash area, tub-free but two sinks and more than enough international sockets and iPhone chargers to meet most millennial demands, and proper curling tongs that will delight some girls), once that visitation was accomplished we sat on an upper terrace while mixologists almost danced as they presented things. There were individual bottles of red stuff, metal caps opened by a mixologist wearing a finger ring with a slit in it. He then siphoned yet more smoke into what was already a smokey mezcal base. There were Blue Moons, with gin, rum, and Curaçao, and there was mezcal in a martini glass ‘bowl’ floating in a fishbowl of smoke…. 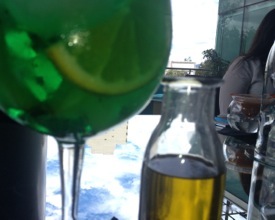 Green gin and tonic, next to olive oil

Fortunately there was also food. As of September 2015 all the food will be José Andrés, the Spanish wunderkind who has a growing empire around the USA (he is calling his all-day operation here Jaleo). Today we ate simply, ceviche and tuna, while the mixologists worked overtime. It felt almost rude to say no when a green-dyed gin and tonic wafted our way, but I had to get back to work and Benoit Racle had to revert to jeans and T-shirt to continue turning this exciting place into even more of a luxury hotel.