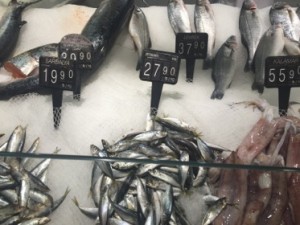 The gal said only the other day that Turkey is devoted to fish – the reason that Wolfgang Puck has put a Spago into the luxury St Regis Istanbul hotel rather than a Cut, as at 45 Park Lane London, is that a full range of different beef cuts here in Turkey would have to be imported, at prohibitive cost. However, some chefs do manage, and Spago’s clever Peleg Miron has found a local dairy farmer whose beef he then ages himself, at the hotel, and the ribeyes on the menu are thoroughly recommended. Anyway, fish. Having eaten so much seabass, seabream and squid, it seemed like a good idea to do that local immersion exercise of going to a supermarket. This was the Sunday evening selection left at Macro Center, five minutes’ walk from the St Regis. 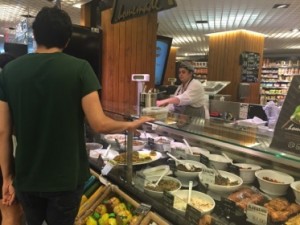 There were tubs of yoghurt, in full kilo sizes and more, and blissfully they were mostly real yoghurt, plain so you can add your own flavouring, and full-fat, which gives taste. Anathema to a lover of authenticity is low-fat yoghurt with artificially-sweetened fruit flavour… The deli counter had ranges of spiced Turkish sausages, sucuk or sujuk, dried for some time and usually cut into slices and cooked in its own fat. I was reminded how helpful Four Seasons at The Bosphorus room service menu is: it includes a list of popular Turkish foods, with such items as Simit, a circular bread with sesame seeds; Su Böregi, baked phyllo filled with feta, and Coban Salatasi, diced tomato and cucumber salad. 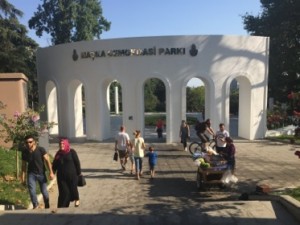 Then I crossed the road and joined hundreds, if not more, locals enjoying the late summer sunshine in Macka Park. You could buy roasted sweetcorn on your way in, but many had arrived earlier with collapsible chairs and tables and all the paraphernalia for a long long family picnic, the type that you see all around the Mediterranean, especially at weekends. In one shady area a short-story reading, promoted by social media, had attracted nearly a hundred avid listeners. They sat on the grass. The author had a chair that looked as if it would display its collapsiblity at any moment. Not far away a would-be Cirque du Soleil troop practised. Some gingerly tiptoed along a tightrope strung between two trees. Other pairs competed to see who could do a vertical headstand, on a prone colleague’s bent knees, the longest. 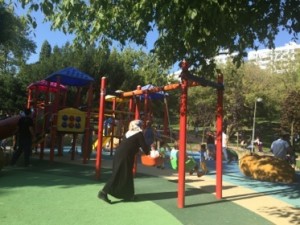 .. and one of its kids’ playgrounds

I saw a paracourse with sturdy work-out bits, just like the ones along Copacabana Beach in Rio. Kids had a ball in the two playgrounds. It was all very jolly, and very serene, and then I went back to the life of a luxury hotel at the end of the weekend. Looking out of my window, I was glad I had not followed the crowd and gone out of town for the weekend. Dolmabache Avenue, trying to travel east, was one solid double-line of traffic. Nothing moved for over half an hour.