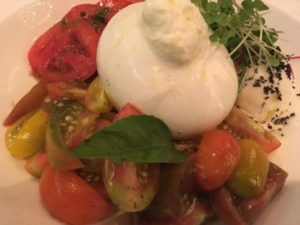 The gal is on a Taj run right now, and next on the agenda was Taj Santacruz Mumbai Airport hotel, which opened January 2016. This is a luxury hotel that is indeed part of the massive airport complex, which has evolved from the British RAF aerodrome here, RAF Santacruz, home to several squadrons during WWII. It is a fascinating concept, namely a highly modern luxury hotel, 279 rooms set around a six-floor rectangle 1,400 feet long, with an open-centre atrium (see above), with an end Tree Of Life that has a sun and moon which move, thanks to skilful projection. 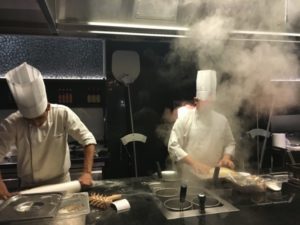 Chefs at work in the Rivea kitchen

This is a business and convention hotel, and guests are in a hurry, and hungry. Here they have a really good choice, from modern-Chinese in China Inc, where you dine under a dragon-shaped glass sculpture, to all-day, and Rivea, which is Italian served in an ice palace of palest aquamarine (dine under three multi-level candle-like chandeliers). We had dinner there, which in my case started with an outstanding burrata from Bangalore, and a glass of St Clair Family Estate 2015 Pinot Noir from Marlborough. At the far end of the restaurant we could watch the chefs as they worked magic that was much more authentic than many cooking shows on television. 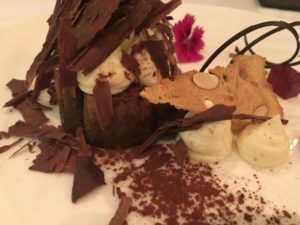 And then we took a walk, past the Lexus and Maserati showrooms on the right hand side of the five-minute interior walk to the airport’s domestic terminal. Yes, this hotel is indeed integral with the airport, but you never hear a sound: I was in room 433, at the far end of the massive rectangle, and I heard no noise of plane movements (see the video below). Back in the hotel proper, I asked why there is a prominent two-sided aquarium in the main lobby. The answer is obvious when it is pointed out that Dr Reddy loves fish – and Dr G.V.K. Reddy is the owner of GVK, which owns the airport as well as 75% of the hotel. 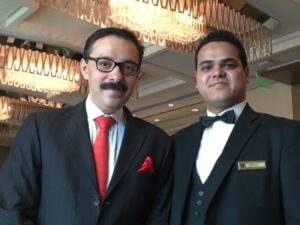 It is Dr Reddy’s daughter, Shalini Bhupal, who scoured Italy to find the stunning chandeliers that feature in so many areas of this luxury hotel – I am not sure, indeed, how much of the interiors is thanks to her, and what the big-name designer, Jeffrey Wilkes, actually did. I am sure that this hotel is a clever concept. It is right on hand for all the airport’s terminals, which operate 24/7, it is close to two prominent business areas, and to two exhibition centres. Very clever. The sixth floor club lounge, by the way, is really agreeable, looking straight out over the runway: while I had coffee here I read about Indian coffee styles, including peaberry, rich and nutty, and aged monsoon Malabar, low in caffeine – as a perennial traveller you learn something every day.  I was also incredibly lucky here to have an outstanding butler, who miraculously only appeared when he was actually wanted. NOW SEE THE VIDEO OF END ROOM 433