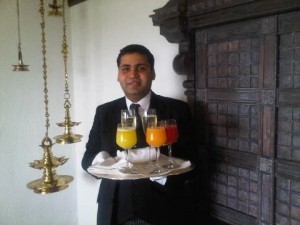 A butler welcomes you at Taj Mahal Delhi

Arrive in a luxury hotel in India and if you are a good person – and there is no reason why the gal should not be – you are welcomed in style.

You have a vermilion bindi put on your forehead, rosewater is sprinkled, a wreath of fresh jasmine or deep red roses is put around your neck… for long life, good health and prosperity (actually according to Wikipedia the vermilion pigment includes HgS mercuric sulphide which is considered toxic, I must stop checking in to so many luxury hotels! – no, seriously, what they use today is organic and artificial….).

Also, if the good person is really lucky, a butler appears at some early point.  Regardless of time of day, he/she will be bearing a tray offering champagne, and fresh juices.

It is now the Time of Taj, which sounds a little like time-for-tea (Tata owns Twining’s and several other tea brands).  First, it was lunch at the Taj Palace, Delhi, which will soon be hosting the meeting of the top BRIC leaders, bringing together the leaders of Brazil, Russia, India and China.

A colourful array is prelude to dinner at Varg, Taj Mahal

They are being spread around, apparently.  Wonder which lucky person, Hu Jintao, Vladimir Putin or Dilma Rousseff, will be lucky enough to stay in the recently-opened Tata Suite here? It cleverly has a private-suite-within-a-main suite.

It is 7,000 sq feet in total, which includes a grand piano, a private gym, a spa with antique Turkmenistan rug for your yoga, and the bathroom has steam, sauna and a ceiling-fed, colour-changing infinity-edged bathtub.  There is a meeting room for 14, which sorts the men from the boys, so to speak, as the dining room only seats 12.

Two meeters might well be forced to eat elsewhere, in which case they could well head for the hotel’s clever Masala Art restaurant.  Its menu cover shows a painting by Paresh Maity, who did seven giant murals at Delhi’s new airport terminal.

Inside, dishes are listed as Water Colours, First impressions, Master Strokes and so on. Even the nibbles were an artistic presentation – loved the curd and water chestnut kebab patties, and garlic-flavoured homestyle spinach, and mustard leaves. 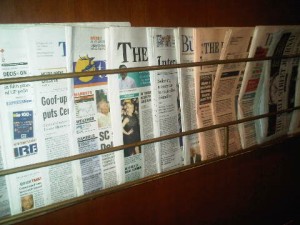 The array of daily newspapers is staggering

Indians never stop eating, or encouraging YOU to eat.  Every ordered meal is punctuated by pre-meal amuse, something the chef insists you eat.  Wherever an entracte sorbet could possibly be added, it is. And ‘no’ to dessert results in a please-try-this and if you still decline, trays of sweet goodies arrive to tempt you one last time.

In the room, fruit is complemented by nuts, dried fruits, and sweet snacks (before a spa treatment, the healthy pre-session drink is invariably sweet-sweet).  Indians also never seem to stop reading.

I am still amazed by the number of newspapers, and they are give-away, a few cents. Apparently the magazine world is also exploding, with local versions of every well-known glossy.  Architectural Digest will be launching soon, to add to the interior decoration magazines that already abound.

Anything that communicates FOOD is a double-whammy, and the audience laps it up.  At Taj Mahal, Delhi, someone cleverly mentioned English singer Adele in the hotel’s Facebook posting after her sensational six-2012 Grammy wins. French mixologist Maxime, in the hotel’s Ricks bar, introduced special new cocktails in her honour.

Within a few days the Facebook page logged 60,651 viewers…  Digvijay Singh, the food-loving GM of Taj Mahal, positively beamed when he shared this bit of information.  WOW.

He also introduced me to the hotel’s sommelier, Marketa Sitarova from Prague. Her parents have always been in the Czech wine business and she studied in France.  For us, she chose A Degli Dei Toscana IGT Cavalli Selection 2007.   One learns something every day.

Designer Roberto Cavalli bought a Chianti estate some 30 years ago and in 2000 his horse-loving son Tommaso started a vineyard (he has now gone on to add a Cavalli vodka – apparently he always wears his father’s shirts but prefers other-brand jeans).

A salmon tower in Varg

The 296-room Taj Mahal is over 90-percent business, which means it needs to attract outside (non-resident) diners.  It has several restaurants, including Chinese and international, and two very attractive rooms designed by the talented-twin duo of Mario and Theo Nicolaou.

There is Wasabi, featuring dishes from Masaharu Morimoto (Chef Morimoto).  There is also Varg (‘preciousness’), where we dined.  This one has a wall of original artwork from old homes, and overhead are giant scarlet beadwork lampshades, which match the water tumblers.

I started with Narangi black cod infused with Indian tangerine, which resulted in a tower, held on a skewer, of lumps of fish interspersed with dry-crisp wafer.

Of the many breads, my favourite was the tomato mozzarella kulcha, from Amritsar.  This is definitely the kind of thing to leave to professionals: a recipe I have found needs flour, oil, yeast, baking powder, sugar (oh dear), curds, salt, milk and more milk for kneading ‘if required’.

As My Man says, like shucking oysters or getting difficult visas, it is better to leave some things to professionals…  that growing list includes making kulcha flat bread.  It also includes biryani, rice and something.

Here, the Varg presentation cleverly comes in a clear glass preserving jar.  What will I find tomorrow, in one of the two homes of biryani, Hyderabad (the other one is Lucknow)?  Meanwhile, Digvijay Singh tells me about the hotel’s Chambers Club, hotbed of India’s top lawyers.

There are 1,500 members, but only about half use the club, here, regularly. As with Soho House, members can opt for local, or worldwide, membership: if they choose, and pay for, the latter they can use the other Taj clubs, say in Mumbai.  As always, the evening goes by much too fast.