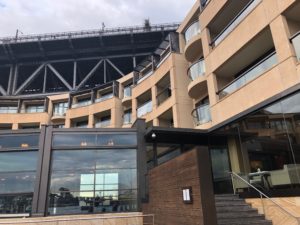 Park Hyatt Sydney is a snake-shaped sculpture that seems to nestle right in under Sydney’s iconic Harbour Bridge. This spot was the original slipway for Campbell’s Cove, and the city’s police headquarters were here from 1885 to 1986. Later, Japanese developers EIE thought it would be ideal for a second Regent, to complement what is now Four Seasons Sydney, but Bob Burns did not want another hotel so close to the first, hence the opening in 1990 of the 155-room luxury Park Hyatt Sydney. Today it is once again owned by Japanese, the Daisho construction giants who have added ultra suites on the fourth floor rooftop, and invested in an onsite bakery working 24/7 to produce superb ‘real’ breads. 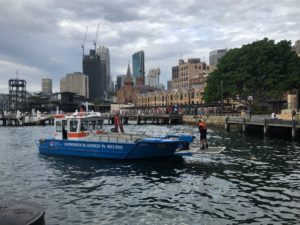 This is one of a small minority of hotels to have a 24/7 gym, and as dawn rose the sky was painting-like (see the image above). A few minutes later the harbour cleaners were out, clearing the few bits of litter. Already at that hour, cross-harbour ferries were plying back and forth, bringing early commuters from Mosman to Circular Quay, and local fitness enthusiasts were jogging around the hotel – the boardwalk that shadows the hotel’s footprint is public territory. How encouraging to see millennials, and younger, exercising at all hours: I even saw at least a hundred being led in mass physical jerks in First Fleet Park, a few minutes’ walk from the hotel. 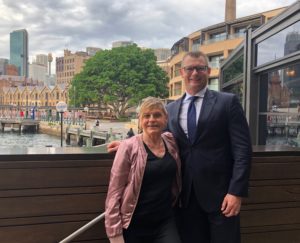 GM Marc von Arnim knows he is custodian of a unique hotel, marvellously integrated into the ambience, which is also a gallery of Australian art. There are whole public-area walls of carved yellow sandstone from Gosford Quarry, 20 minutes away – the female artist, G.W. Bot, calls their indented carvings ‘glyphs’, silent words. I love the local-scene black and white photographs by Robert Billington, many of them taken with his Hasselblad. On a shelf in room 211, an amazing room that gives a 270-degree view from the Bridge right past the Opera House to Circular Quay, I have what looks like a pair of anthropomorphic book ends. This one of set of 61 pairs of wood art by Sholto Turner and Luban White, who have used blackheart sassafras, box-elder maple, claret and desert ash, and English elm. 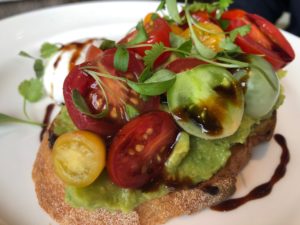 Avo toast to start the day

This is a hotel that also benchmarks away from luxury accommodation: Marc von Arnim looks instead at fashion and other brands. He is introducing bespoke perfumes in the spa, made to client order via an algorithm invented by a Frenchwoman. In the Dining Room, only best products are used of course, including a local butter churned by a French-Lebanese, Pierre Issa, working as Pepe Saya. In its bid to up the quality stakes the whole time, Park Hyatt Sydney now also has its own inhouse bakery, working day and night to produce the real-breads that today’s real-food lovers crave.  And it adds elements of real fun: on May 1st, Marc von Arnim introduced a monopoly board based on the hotel and its facilities, and its environs – not for sale, only for hotel guests (as he says, the key is always to exceed expectation).  WANT TO SEE ROOM 211?