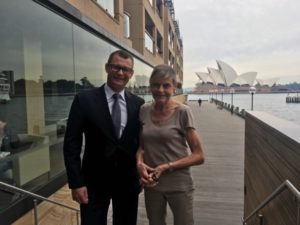 Better save up your money to stay in Sydney’s top-rate luxury hotel, Park Hyatt Sydney – its premium over competitors is awe-inspiring. Obviously the fact that it seems like the closest hotel to the Opera House gives it an edge. You feel as if you are going to float away at any moment: it is so close to the water that the hotel’s underground carpark has a retaining wall to prevent the Maseratis, or Mercedes, from becoming damp. The gal was told that by the marvellous Marc von Arnim, who is in fact a Graf but, as he says quickly, Germans do not use titles (he does not waste time, this guy; when it was photo-taking time he rushed out to the ideal spot, and 30 seconds was all that was allowed). 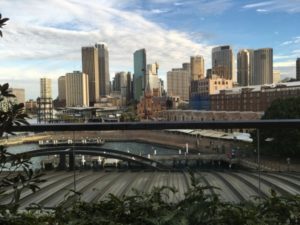 Looking back at Sydney’s CBD

It does not matter which of the 155 rooms you are in, the views are amazing. Because the four-floor building is tadpole-shaped, all rooms have curved walls. From 212, I could not only look across my balcony at the Opera House but also, turning right, to the main business area of town, the CBD, central business district. The room itself was so well tuned to the ambience, all creams and taupes, to avoid conflict with the exterior (see the video below). I love the way I could lie in the bathtub, with the pull-across wood screen open so that I had that Opera House view – although it was a bit of a shock early in the morning, when showering, to discover a block of apartments seemingly just outside (it was in fact the slow arrival of an 11-deck cruise ship, one of those monstrosities of the seas, this one a Carnival something or other). 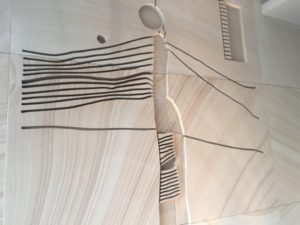 Sydney’s Water Police headquarters were here at Campbell’s Cove until 1986, and then a hotel, originally Regent, was planned. Bob Burns was involved, but said he did not want competition so close to what was still a Regent (it is now Four Seasons). Park Hyatt cleverly came in, and has made the pinnacle of the city’s ultra-luxury its own, ever since. An 18-month closure, 2011-2012, only enhanced this luxury product – the rooftop suites-with decks-and 360° views are booked over 50% of the time, and with 255 staff it means there is more than one on the concierge desk at any one time. 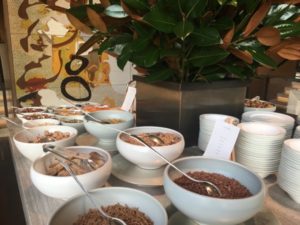 I love not only the views and service here but such local features as G.W. Bot’s etched walls of Sydney sandstone, from nearby Gosford Quarry. Corridors have old Sydney photos, by Robert Billington, and so on.. And the food! You really cannot eat any level below good in Sydney but The Restaurant’s cuisine is magnificent. I adored my hand-cut Darling River tartare of farmed kangaroo, topped with radish, followed by Murray River cod. At breakfast I was impressed by the array of health breads, cereals and fruits, and more (breakfast is really important here as most international arrivals, particularly from the USA, appear before 9.30 a.m.). And when I left this luxury hotel, I admit I just wanted more. NOW SEE MY ROOM, BELOW