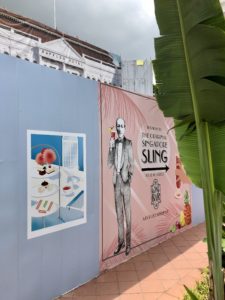 Many would remember that the Sybaritic Single adores when luxury hotels and retail walk hand-in-hand. There should be more such collaborations, be it the Sacher-Torte or the Westin Heavenly Bed.

One of his favourite places, the Raffles Hotel in Singapore, is undergoing a shockingly large-scale refurbishment and, as it inevitably happens, its re-opening is delayed. Could it be some ancient curse that hoteliers inevitably fail to deliver an opening on time (and very often, on budget)?
Nevertheless, the Raffles could never imagine depriving hundreds of thousands of visitors and residents of its favourite cocktail, the Singapore Sling. That’s how a pop-up Long Bar appeared on Seah Street, around the corner from the hotel’s grand entrance – with just 15 seats. What a clever thing to do, considering that the bar sells more than 2,000 cocktails a day, at USD 27 each. Those who consider themselves true aficionados of Singapore Sling can also purchase a box of chocolate truffles infused with the cocktail at the adjacent ephemeral gift shop.
The Sybaritic Single walked in well before midday to start the day with a glass of his favourite drink and could barely find a table – he was not the only one wishing to finish breakfast with a signature rosy hurricane glass in hand. While sipping the sling, he kept thinking of Ngiam Tong Boon who invented the cocktail back in 1915. Could the humble Hainanese barman imagine becoming the Christian Dior of Singapore – and a true icon of its most famous luxury hotel, with his creation generating close to 20 million US dollars per annum 100 years later?