The Sybaritic Single believes that if Coco Chanel were a luxury hotel, she would be the Ritz Paris where the great couturier was a resident for more than 35 years before passing away on Sunday, 10 January 1971. Apparently, almost half a century later a new hotel might claim being more Chanel than any other. 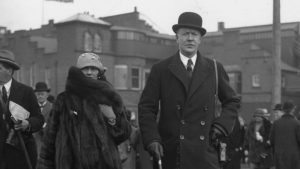 Between 1923 and 1929, Gabrielle had an affair with the Duke of Westminster, the richest man in England. Apart from sending private trains and yachts for Chanel, he also brought her to Scotland, making Rosehall Estate their summer love nest. Originally built in 1822, the rustic 22-room mansion was redecorated by Gabrielle, who infused the interiors with her signature style, basing the aesthetic on her Parisian apartment. This is the only building in the United Kingdom ever designed by Chanel. Several rooms still show her elegant style today, with shades of beige and hand-picked floral wallpaper that she shipped from France.
Sitting on 700 acres two hours away from Inverness, the mansion includes five outbuildings, a garden, a lake and a river on its expansive grounds. This is where Chanel fell in love with tweed, which has been carried through the house’s collections until today.
Gabrielle was also known to enjoy the surrounding nature with the Duke and their guests. “This is a very agreeable house in a Highland valley,” wrote the then-future prime minister Winston Churchill in May 1927. “Well-equipped with salmon, trout, and snipe. The air is most exhilarating, keen and yet caressing. It is quite different to England. Coco got three fish yesterday.”
After being abandoned for 52 years, the estate was recently acquired by a foreign buyer and will soon be turned into a luxury hotel. The restoration is expected to be slow, however the Sybaritic Single looks forward to staying at this boutique hotel as soon as it opens. The legacy is believed to remain very Chanel.