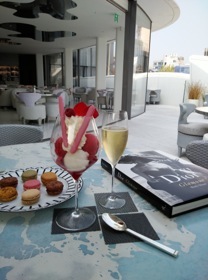 Dior, Pierre Hermé and a glass, of course, in Seoul

The Sybaritic Single loves it when luxury hotels come up with innovative and unique collaborations, be it a Dior Suite at St. Regis New York or a Fauchon minibar at the Baccarat Hotel New York. Get it right and the collaboration formula can, in its own right, break down further into Starwood Hotels and Resorts, and Starwood Capital, which owns the Baccarat brand.

Since, as we know, Sybaritic Single is essentially peripatetic, his latest escapade was an eventful ‘four countries in two days’ jet-set, complete with delayed flights and missed connections. Nevertheless,  he still managed to fly all the way to Seoul for a morning plum tea at his favourite lobby, as well as a glass of Champagne at the world’s only Dior Café.

Earlier this year, at the peak of MERS, the French fashion empire inaugurated its largest boutique in the world – christened as the ‘House of Dior’ – in the South Korean capital. Atop of the building is the Dior Café, created in collaboration with Pierre Hermé, the Picasso of pastry.

Sophisticated desserts call for haute couture precision and this is one of the reasons why most of Dior Café’s ingredients are flown in directly from Paris instead of being sourced locally. The presentation of the sweet courses rivals the couture and art objects displayed at the floors underneath. It does still remain a mystery, however, how Dior’s slender silhouette and a collection of extravagant desserts manage to co-exist in a seemingly perfect symbiosis.

Navigating through the sweets took longer than expected, and sadly the Sybaritic Single ran out of time to detox afterwards at the Sulwhasoo Spa at the Lotte Hotel before bidding farewell to Seoul. That spa, incidentally, is another example of thoughtful and destination-unique chemistry between a luxury hotel and a ginseng cosmetics brand. Special enough to fly halfway around the world for ….. perhaps next weekend?