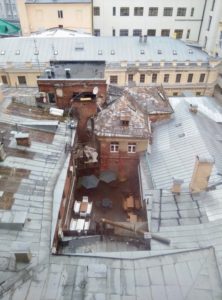 What the travel concierge had called a beautiful courtyard

The Sybaritic Single makes most of his reservations through his travel concierge who has been looking after him very well for more than a decade. Whether it is Casablanca, New York or Ulan Baator, luxury hotels are always informed of the particular preferences and desires, even when in-room hairdryers in Panama need to be upgraded in advance of his arrival. However, it was one recent experience that left him wondering whether some hotels go a bit too far and a bit too blindly in attempt to accommodate all of the travel concierge benefits.

Enroute to Moscow, the Sybaritic Single made arrangements to stay in a deluxe room that promised “stunning views of Bolshoi Theatre, Neglinnaya Street or a beautiful courtyard”. Upon arrival, he was warmly welcomed, granted early check-in and a generous upgrade to a suite. Expectations grew as the Sybaritic Single went up to his rooftop suite.
Up there, the Sybaritic Single opened the curtains wide. A moment of silence followed as he absorbed the view of what was advertised as a “beautiful courtyard”. What opened in front of him was one of the worst and grotesque inner yard views he had seen in his life – the same picture both from the living room and his bedroom. Who would have imagined that such places even existed at the heart of the Russian capital?

Thankfully, it was only a night’s stay in Moscow and the Sybaritic Single did not have too much time to absorb the view. However, this experience prompted him to wish that hotels were more thoughtful when they look after their most important guests. In case of the Sybaritic Single, the original deluxe room with a great view would have been appreciated far more than a generous upgrade to a suite with a vista which eventually became the main memento of that luxury hotel.