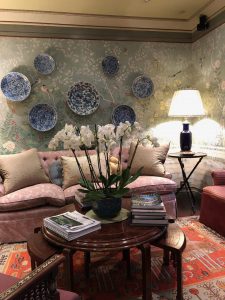 The Sybaritic Single prefers grand over boutique when it comes to luxury hotels. Very often, “boutique” comes as an excuse for tiny rooms with a weird layout, limited service and lack of proper facilities.Having stayed once at a 15th century boutique hotel in Baku made the Sybaritic Single avoid anything “boutique” for many years. However, one day his concierge sent him an invitation-only membership card of Relais & Châteaux, a collection of hotels and restaurants known for their true boutique luxury. It was the time when the Sybaritic Single was planning a few days in Reims where Domaine Les Crayeres, part of Relais & Château, also happened to be the most luxurious. He tried it once and instantly fell in love (see the exterior, above).Back in Paris, he decided to spend a night at Hôtel Daniel, superbly located between Champs-Élysées and Rue du Faubourg-Saint-Honoré. Behind the Haussmann-era façade were the 26 rooms and suites, decorated with 18th century French bespoke hand-painted chinoiserie-inspired Toile de Jouy wallpaper by De Gournay, furniture sculpted out of precious woods, rugs from Kazakhstan, mini-bars hidden away inside antique Lebanese cabinets, overstuffed sofas, silks from the Orient and shimmering satins. The Sybaritic Single took residence in one of the charming suites, perfect for a solo traveller.The hotel encapsulated the best of “boutique”: each member of the team addressed the Sybaritic Single by name, arrival and departure timings were at his convenience, and he was never asked to sign any bills. Like any good host, the hotel catered to the Sybaritic Single’s precise needs, which translated to breakfast prepared made-to-order, at any time of day, along with his favourite tea and Champagne – both at precisely right temperature the moment they reached his suite. Nobody spoke too much, the service was efficient and gracious, a level above any grand hotel butler.For the Sybaritic Single, this hotel was an example of a great luxury boutique: understated, personalised, authentic and very chic.