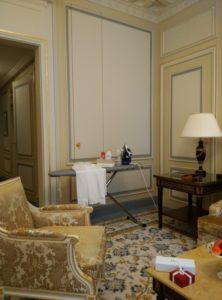 One of the most important elements that the Sybaritic Single values at luxury hotels is intelligent personal service. It must be efficient and invisible – this is when it makes a luxury hotel shine. Prior to his arrival, he appreciates when a member of the hotel team gets in touch to find out what his preferences might be – using a personally signed e-mail rather than an automated pre-arrival questionnaire. The downside of such questionnaires is that, when they actually happen to work, they tend to generate a dozen of confusing e-mails from various hotel departments.

This last weekend, St. Regis Houston did a brilliant job in reaching out and taking care of the Sybaritic Single’s requests (the main being the 110V/220V transformer for the hairdryer). As you read these lines, the happy traveller is already crossing the Atlantic on his way to the Four Seasons Moscow – another great example of a clever pre-arrival experience. Despite his frequent travels, the Sybaritic Single barely remembers coming across a really good hotel butler. Packing and unpacking service sounds luxurious, but is it ever used, and is it something what a butler should do anyways? What the Sybaritic Single appreciates, however, is a quality overnight shoe-polishing service and a wake-up call with a choice of hot beverage delivered at the same time. Ironing and seeming facilities are equally important, and the Ritz Paris can probably boast the most thoughtful in-room ironing set which comes complete with a space-age iron, starch spray and fabric perfume.

Luxury hotel housekeeping should be sensitive to the guest’s pace and preferences. Recently in Buenos Aires, the Sybaritic Single felt he was in a kindergarten as an overly attentive lady would move his shoes, tie the laces and put them in a particular order. She would also re-arrange his devices and the chargers would get their power cords tied in a sophisticated boating knot. At turndown, the TV would always be on and play the same tune, and the curtains would be closed despite the Sybaritic Single actually enjoying sleeping with his windows open. He appreciated the tremendous effort, but was it what he really wanted?

Efficient departure from a hotel is sometimes more important than a smooth check-in. The Sybaritic Single tends to run late for his flights, so an automated check-out using an app is actually a great idea. Reviewing the folio is important as blind express check-out forms have left a bitter aftertaste on a couple of occasions. Great luxury hotels also have fast-track arrangements their airports. The Ritz Paris whisks its guests straight from the jetway upon arrival, while Raffles Beijing ushers its patrons to a VIP terminal entrance and escorts you through to emigration upon departure.