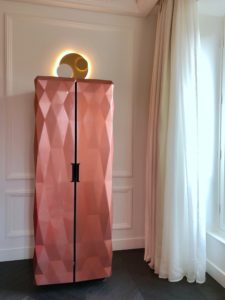 Sybaritic Single has finally crossed the doorstep of one of the 2018’s most anticipated luxury ‎hotels and found himself inside a temple of taste – even the flower arrangements in the lobby featured bright ‎orange carrots. Located in a 1830s Haussmann building just off Rue Royale and Boulevard Malesherbes, the 54-room Fauchon L’Hôtel ‎replaced Baccarat’s flagship boutique and became a first in the newest hotel empire of Jacques-‎Olivier Chauvin (President and CEO, Fauchon Hospitality) who aims to open 20 properties over ‎the next decade with a focus on Japan, Europe and the Middle East.‎
The most iconic Parisian gourmet store since 1886, Fauchon already attempted to enter luxury travel in 1994 with Le Fauchon, a 35-metre yacht offering bespoke culinary itineraries to the most devoted fauchonistas. However, the offering was too niche and the yacht was sold only a year later for less than half the original price.
Today, Fauchon becomes synonymous with boutique hotels where glamour is at the heart of the new operation and is called GLAM: Gourmet, Location, Attention and Mesdames. The Sybaritic Single loved the members of the front office ‎team who were both very young, very attractive and very efficient. In the past, many hotels tried to develop the ‎right talent who would check you in, be your concierge and answer any question – and most ‎have failed, including the Armani Hotel in Dubai which failed heavily. However, it doesn’t seems to be the case at Fauchon where its team members, including the general manager, are prepared to do anything at any time day or night, even take guests for a private sightseeing jog.The Sybaritic Single also noted meticulous attention to detail in his room: bathrobes in two sizes and slippers in ‎three, bathroom amenities were top-quality Carita, who are also responsible for the spa. The infamous Dyson ‎hairdryer came in signature fuchsia in a pink leather coffret, however the Sybaritic Single is not ‎a fan of that particular device: “Form over substance”.‎

On the other hand, the glossy pink in-room gourmet bar is a game-changer, stocked with a ‎dozen complimentary Fauchon products which align with each of the guest’s tastes: sweet, savory, healthy or a mix of all three. The Sybaritic Single ‎wore a smile of approval as he discovered rosé Champagne, foie gras with truffle, biscuits with ‎Parmesan and more truffles, a very wide selection of teas and raspberry macarons in his. The ‎gourmet bar itself is a work of art, designed by Sacha Lakic of Roche Bobois and available for ‎purchase.‎

Sipping Champagne with the in-room treats and anything imagined by a private chef, overlooking the Madeleine Church and the bustling Parisian ‎life, was a wonderful way to spend the entire weekend. Staying at this luxury hotel kept evoking memories of Marco Ferreri’s “La Grande Bouffe”. Interestingly, all dishes for ‎that infamous 1973 film were also provided by Fauchon. By the time the Sybaritic Single left his ‎room, he felt so full that he could barely taste anything at The Grand Café or Le Jardin des Thés ‎downstairs. In fact, he could not think of food – Fauchon or else – for the entire following week.